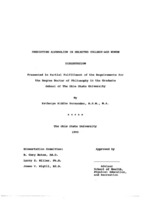 The citations below are meant to be used as guidelines. Patrons must make any necessary corrections before using. Pay special attention to personal names, capitalization, and dates. Always consult appropriate citation style resources for the exact formatting and punctuation guidelines.
Item Information
Item Link - Use this link for citations and online mentions.
http://hdl.handle.net/10755/22932
Abstract

This research was a descriptive correlational study. A three part questionnaire packet was developed to collect data and was reviewed by a panel of experts to determine content validity. A pilot study was conducted to minimize the chance of measurement error. Concurrent and construct validity were established for the Gender Alcoholism Screening Instrument during the study.

The accessible population was comprised of undergraduate students enrolled in Health Education 103 at The Ohio State University (n = 327). The entire population was used in the study, so randomization was not needed and sampling error was not a threat. A response rate of 87% (n = 284) was achieved. Of the women (n = 92) and men (n = 191), approximately 50% were problem drinkers and alcoholics. The data analysis was conducted with SPSS/PC+.

The results of this study predicted with 70% accuracy, the female college-age alcoholic women enrolled in Health Education 103 as White, from a non-intact family, never married, no children, not living with her family, 18 to 22 years old, a member of a sorority, annual family income of $>$$50,000, claims religious affiliation and has a family history of alcoholism. These predictors were further supported by the Gender Alcoholism Screening Test and its underlying constructs and the family factors model. The generalizability of these results are limited to the sample used for the investigation.

These findings have implications for Health Educators, chemical dependency counselors, Psychologists, and those in the medical professions in the development, implementation, and evaluation of alcohol prevention education and screening instruments.

This dissertation has also been disseminated through the ProQuest Dissertations and Theses database. Dissertation/thesis number: 9544562; ProQuest document ID: 304204059. The author still retains copyright.