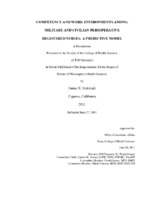 The citations below are meant to be used as guidelines. Patrons must make any necessary corrections before using. Pay special attention to personal names, capitalization, and dates. Always consult appropriate citation style resources for the exact formatting and punctuation guidelines.
Item Information
Item Link - Use this link for citations and online mentions.
http://hdl.handle.net/10755/22616
Abstract

This study examined the self-assessed competency levels, work environments, sub-specialty training and selected demographic characteristics of two groups—civilian and military (United States Navy) perioperative nurses. The Nurse Competence Scale (NCS) was used to assess competency levels, and the Practice Environment Scale–Nursing Work Index (PES-NWI) was used to assess the nursing work environment. Demographic characteristics, including years of experience, educational level and type of sub-specialty training, were gathered, and comparisons were made between the groups.

A cross-sectional non-equivalent comparison group design was used. The research was conducted by mailed survey packets. All active duty Navy perioperative nurses (228) were surveyed, as were a random sample of 228 civilian perioperative nurses, the names of whom were obtained from the Association of periOperative
Registered Nurses (AORN) database.

Using a Linear Regression Model, group was a significant predictor of competency as measured by the NCS. Navy nurses are predicted to score 7.5 points higher than the civilians (p=.003). Using the Cronbach’s alpha, all NCS sub-scales showed reliability in the good to excellent range (≥.8). All PES-NWI sub-scales also demonstrated adequate reliability with scores ranging from .757 to .886.

Additional characteristics and traits to include demographic factors that may contribute to nursing competency should also be explored, as only 11% of the variability of the NCS score was explained by the independent variables of this study.

This dissertation has also been disseminated through the ProQuest Dissertations and Theses database. Dissertation/thesis number: 3493004; ProQuest document ID: 917436233. The author still retains copyright.