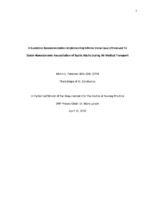 The citations below are meant to be used as guidelines. Patrons must make any necessary corrections before using. Pay special attention to personal names, capitalization, and dates. Always consult appropriate citation style resources for the exact formatting and punctuation guidelines.
Item Information
Item Link - Use this link for citations and online mentions.
http://hdl.handle.net/10755/22603
Abstract

Nature of the Project: Sepsis is present in one out of every three hospital deaths (CDC, 2020). Primary and time-sensitive interventions for sepsis include intravenous fluid and vasopressor administration for hemodynamic resuscitation, but inappropriate administration can lead to complications and poorer patient outcomes (Schmidt & Mandel, 2020). In the early stages of care, air medical transport clinicians frequently transport septic patients from small, rural hospitals to hospitals with higher levels of care. These clinicians could utilize inferior vena cava (IVC) ultrasound to guide optimal hemodynamic resuscitation. Therefore, an IVC ultrasound guideline was created for sepsis management during air medial transport to improve patient outcomes.

Project Implementation: An additional literature review guided the creation of an IVC ultrasound-guided hemodynamic resuscitation guideline for the management of septic, non intubated adults. Subsequently, the guideline was given to six physicians for feedback.

Evaluation Criteria: Feedback from four emergency department physicians was obtained through an online survey. The qualitative and quantitative data was analyzed through descriptive analysis.

Outcomes: Most (75%) respondents had agreed or strongly agreed regarding the appropriateness of the targeted population, IVC ultrasound use in sepsis patients, and recommended guideline. Most (75%) of respondents reported that they would use IVC ultrasound and this guideline for septic patients in their practice due to ultrasound accessibility and usefulness in hemodynamic resuscitation.

Recommendations: It would be beneficial to receive additional feedback from more diverse respondents for additional feedback. If the guideline was still received well, it could be offered to an air medical transport organization or healthcare facilities that have limited access to invasive hemodynamic monitoring equipment.