Adoptive parents' lived experience of bonding with their adopted infants: A phenomenological study 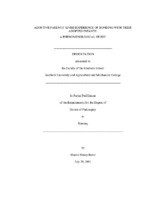 The citations below are meant to be used as guidelines. Patrons must make any necessary corrections before using. Pay special attention to personal names, capitalization, and dates. Always consult appropriate citation style resources for the exact formatting and punctuation guidelines.
Item Information
Item Link - Use this link for citations and online mentions.
http://hdl.handle.net/10755/22349
Abstract

A qualitative method, using a phenomenological design, was used. Recruitment was through a purposive snowball sampling, and of 15 potential participants, ten met the inclusion criteria. Phenomenological interviews were conducted with each adoptive parent in a community-based setting. Participants were married, averaged 42.5 years old, and the average child's age at placement was 3 weeks. Colaizzi's (1978) eight step technique was used analyzing the data from the interviews. Five themes and 11 sub-themes emerged. The themes were: (1) "My Family Plans for Parenting"--which reflected making the decision to adopt and adapting to the new infant, and the new infant adapting to the parenting; (2) "Caring for an Infant as My Own Child"--expressed the belief that this child felt like their biological child, even though adopted. (3) "Dealing with Adoption Agencies and My Families"--has the theme of adoptive parents' advocacy for their child's placement into their residence. Adoptive parents were sensitive to extended families' acceptance, which varied; (4) "My Uncertainty about the Effects of Disclosure of Birth Parents' Identity"--deals with the parent's sense of concern for the child's vulnerability related to the child's knowledge and/or interaction that is permitted with the birth parent/family; (5) "This is Part of God's Plan"--relates to perceived spiritual meaning in the adoption and a belief that children are a gift from God. Of the nine participants who chose to respond to the abstract provided to them, all concurred with the themes that were discovered through the Colaizzi process.

One limitation may be related to the recruitment target, which did not include adoption agencies. Different themes could have resulted under those conditions. However, recruiting was through nurses, counselors, ministers, and social workers.

Four percent of families have an adopted member, and health care providers need to recognize this is but one additional way to become or enlarge a family. The major finding of the themes of the ten participants supports the literature assumption that adoptive and biological parents have similar bonding experiences (Friedman, Bowden, & Jones, 2006). Health care practitioners need to use words and ask discerning questions that promote family cohesion. For example, they should not refer to the child as an "adoptive" child. They should also be mindful that not all adopted children are told of their adoption. This increases the need for family decision making. More longitudinal studies related to the choice by adoptive parents to share or not share with their child that they are adopted would assist in dialoging with adoptive parents about this question. More research into the acceptance by extended families of the adopted family members would promote family cohesion. Finally, it is important to remember that adoptive families are bonding and promoting normal growth and development.

This dissertation has also been disseminated through the ProQuest Dissertations and Theses database. Dissertation/thesis number: 3466203; ProQuest document ID: 884623712. The author still retains copyright.