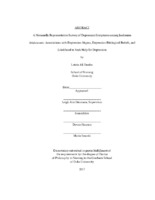 The citations below are meant to be used as guidelines. Patrons must make any necessary corrections before using. Pay special attention to personal names, capitalization, and dates. Always consult appropriate citation style resources for the exact formatting and punctuation guidelines.
Item Information
Item Link - Use this link for citations and online mentions.
http://hdl.handle.net/10755/22328
Abstract

Problem and Purpose: Arab adolescents are considered a particularly vulnerable population to depression. The substantial lack of mental health services and the stigma associated with mental illness on the one hand; and poverty, unemployment, and lack of reasonable hopes for a decent future in the context of corruption of regimes and perceived social injustice on the other, call for establishing committed and effective policies to tackle depression and its associated stigma among Arab adolescents at risk for or diagnosed with depression. However, there is a substantial lack of research that can inform the current profile of adolescent depression in the Arab region. We conducted two systematic reviews on Adolescent depression and mental illness stigma in the Arab region and found that there is currently no solid evidence available on the prevalence of depression among Arab adolescents and its potential associations with depression stigma and help-seeking beliefs and intentions. This gap in the literature makes it difficult to design, implement, and disseminate effective interventions to improve the prevention, diagnosis, and treatment of adolescent depression. Therefore, the overarching purpose of this study was to estimate a prevalence of depression symptoms among Arab adolescents, and determine relationships with depression stigma, depression etiologic beliefs, and likelihood to seek help for depression.

Methods: This study was conducted in Jordan, a Middle Eastern Arab country. A pilot study with a sample of 88 Jordanian adolescents was first conducted to assess the feasibility of collaboration and coordination with the proposed recruitment sites; assess proposed recruitment strategies; confirm the utility of the translated self-reported measures and examining their psychometric properties; and obtaining preliminary findings. Based on the lessons learned from this pilot study, we designed a nationally representative, school-based survey. Data were collected from 2,349 adolescents aged 12-17, using a packet of self-administered questionnaires that included measures on sociodemographic and health history, depression severity, depression stigma, depression etiologic beliefs, and likelihood to seek help for depression. A passive consenting procedure was used to obtain parental consents, while returning the survey questionnaires was considered a tacit assent for the adolescents. The study obtained the needed Institutional Review Board approvals from both Duke University and the University of Jordan. Participants represented all three regions in the country, with 34% from the northern (suburban) region, 43% from the central (urban) region, and 23% from the southern (rural) region.

Conclusions: This study revealed alarming results in terms of the current high prevalence and social determinants of adolescent depression in Jordan. The study also shed light on how depression stigma manifests among Jordanian adolescents and how such stigma relates to their beliefs about depression and likelihood to seek professional psychological help. We discuss how healthcare providers, researchers, and educators can focus attention on developing effective and culturally appropriate screening, prevention, and intervention approaches using evidence-based guidelines to promote Jordanian adolescent mental health, particularly for depression. This approach will be important not only for Jordan, but for all of the Arab region, given that many of the Arab countries have been witnessing years of mass violence, armed conflicts, and war. The study also provides important recommendations on when, how, and why to utilize school settings for anti-depression stigma interventions. Overall, findings from this study provide a solid, culturally competent foundation from which to conduct future research to tackle depression and its associated stigma, and reflect the unique characteristics of Arab culture.

This dissertation has also been disseminated through the ProQuest Dissertations and Theses database. Dissertation/thesis number: 10259521; ProQuest document ID: 1894190943. The author still retains copyright.