The predictors of cultural competence in the baccalaureate degree nursing curriculum: Implications for nursing education 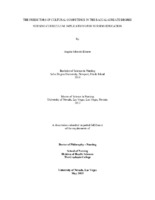 The citations below are meant to be used as guidelines. Patrons must make any necessary corrections before using. Pay special attention to personal names, capitalization, and dates. Always consult appropriate citation style resources for the exact formatting and punctuation guidelines.
Item Information
Item Link - Use this link for citations and online mentions.
http://hdl.handle.net/10755/22246
Abstract

Health care providers are members of a helping profession and need to provide quality care to all members of society. As a result of current and projected demographic changes within the United States (U.S.), health care professionals are faced with the challenges of providing culturally competent care and fulfilling the role as the “helping profession.” From 2000 to 2010, the Asian population increased by 43.3%, the Hispanic population grew by 43%, the Native Hawaiian and other Pacific Islander population increased by 35.4%, the American Indian or Alaskan Native population increased by 18.4%, and the African American population increased by 12.3%. Just as it is necessary for health care professionals to respond to the increase in the geriatric population as a result of the baby boomer generation, it is crucial to address the needs of an increasingly culturally diverse population in the U.S. Preparing to care for a culturally diverse population begins during the teaching and learning process in the nursing curriculum. This study intended to identify the predictors of cultural competence in the baccalaureate degree nursing curriculum. Specifically, predictors examined included selected demographic variables, the use of a stand-alone course on cultural concepts, integration of cultural concepts throughout the curriculum, and the use of a cultural immersion experience.

Josepha Campinha-Bacote’s model titled “The Process of Cultural Competence in the Delivery of Health Care Services” was used as the theoretical framework to guide this study. Campinha-Bacote has studied transcultural nursing and has added to the current body of nursing knowledge with regard to incorporating cultural concepts in the nursing curriculum. This model requires health care professionals to see themselves as becoming culturally competent rather than being culturally competent and involves the integration of cultural awareness, cultural skill, cultural knowledge, cultural encounters, and cultural desire.

Implications for nursing education included: (a) enabling faculty members to plan teaching methods pertaining to cultural content; (b) preparing graduates that are better able to serve the needs of current health care consumers as it relates to specific cultural needs; and (c) determining a starting point for further research related to the predictors of cultural competence and faculty-preparedness in teaching cultural content.

This dissertation has also been disseminated through the ProQuest Dissertations and Theses database. Dissertation/thesis number: 3715109; ProQuest document ID: 1710431128. The author still retains copyright.