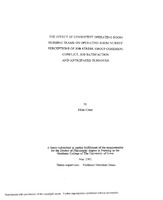 The citations below are meant to be used as guidelines. Patrons must make any necessary corrections before using. Pay special attention to personal names, capitalization, and dates. Always consult appropriate citation style resources for the exact formatting and punctuation guidelines.
Item Information
Item Link - Use this link for citations and online mentions.
http://hdl.handle.net/10755/22144
Abstract

Overall, the nurses in this study had moderately high job stress, high group cohesion, moderate conflict, moderate job satisfaction and high anticipated turnover. The groups differed only on group cohesion and conflict; team nurses reported greater group cohesion and less conflict than rotating nurses. There were no statistically significant differences in team or rotating nurses' perceptions of job mastery, technical proficiency, variety, routinization or challenge. There were no differences detected based upon the type of team in which team nurses worked. No additional statistically significant differences were detected when regression analysis was done controlling for OR size and skill mix.

The findings of this study suggest that method of assignment does have a relationship to group cohesion and conflict. Nurses generally do prefer the type of assignment in which they work but may choose schedule over assignment type. Operating room directors may have reasons other than OR staff nurse satisfaction for employing teams.

Description
This dissertation has also been disseminated through the ProQuest Dissertations and Theses database. Dissertation/thesis number: 3050787; ProQuest document ID: 305514166. The author still retains copyright.
Repository Posting Date
2021-10-18T17:08:07Z
Notes
This item has not gone through this repository's peer-review process, but has been accepted by the indicated university or college in partial fulfillment of the requirements for the specified degree.
Type Information
Category Information
Degree Information
Rights Holder