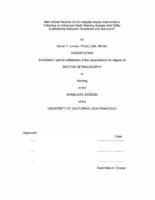 The citations below are meant to be used as guidelines. Patrons must make any necessary corrections before using. Pay special attention to personal names, capitalization, and dates. Always consult appropriate citation style resources for the exact formatting and punctuation guidelines.
Item Information
Item Link - Use this link for citations and online mentions.
http://hdl.handle.net/10755/22101
Abstract

Significance: Patients with worsening sepsis on general hospital wards are at high risk for clinical deterioration, unplanned admission to the intensive care unit, and death. Many hospitals have begun to employ early warning systems (EWSs) to alert nurses and providers that a patient is predicted to deteriorate. Multiple papers in the rapid response team (RRT) and sepsis literature describe typical problems leading to an EWS alert (e.g., systemic inflammatory response syndrome, low blood pressure) as well recommended interventions such as intravenous fluid bolus, antibiotics, and transfer to the intensive care unit (ICU). Despite the evidence base, it remains unclear which actions following an EWS alert might improve 30-day survival.

Results: 1) Advanced EWSs using multivariate regression or machine learning had better prognostic accuracy than point-score EWSs and decreased the RRT and hospitalist evaluation workload substantially. 2) The advanced EWS alert frequently occurred within hours after hospital admission, requiring exclusion of the time period with therapeutic overlap with the initial bundle of sepsis interventions. DNR order change occurred frequently before death, making it an unsuitable exclusion criterion for “expected death” in hospital populations. 3) More sepsis survivors received additional antibiotics, and often before the alert. Decedents received more than twice as much fluid bolus therapy following the alert; had more vital sign documentations and laboratory orders following the alert; more transfers to ICU; and more DNR or comfort care orders following the alert. Some proportion of decedents may have been on a fixed end-of-life trajectory.

Discussion: This dissertation offers a novel approach to characterizing and measuring the impact of fluid bolus therapy on sepsis survival and has the potential to improve outcomes among sepsis patients outside the ICU. Early additional antibiotic coverage may aid survival. Fluid bolus therapy does not appear to aid survival. Measuring expected vs. unexpected mortality in future research may offer additional insights into the treatments effects of sepsis interventions relative to the alert.

Description
This dissertation has also been disseminated through the ProQuest Dissertations and Theses database. Dissertation/thesis number: 10828062; ProQuest document ID: 2089422218. The author still retains copyright.
Repository Posting Date
2021-09-29T13:58:56Z
Notes
This item has not gone through this repository's peer-review process, but has been accepted by the indicated university or college in partial fulfillment of the requirements for the specified degree.
Type Information
Category Information
Degree Information
Rights Holder