Male nurses' experiences of gender stereotyping over the past five decades: A narrative approach 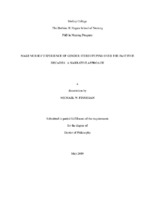 The citations below are meant to be used as guidelines. Patrons must make any necessary corrections before using. Pay special attention to personal names, capitalization, and dates. Always consult appropriate citation style resources for the exact formatting and punctuation guidelines.
Item Information
Item Link - Use this link for citations and online mentions.
http://hdl.handle.net/10755/21968
Abstract

Negative stereotyping of men in nursing has been a chronic problem that has a direct effect on males and detracts from efforts to recruit and retain them. At this time in American history (2018), traditionally male-dominated professions are making significant progress toward the goal of a gender-balanced workplace. However, the opposite is not true. Traditionally female-dominated professions are not attracting or appealing to men. In the nursing profession, the number of male nurses is relatively small and has remained relatively fixed over time. Estimates vary between 6-15 percent, with the current average being approximately 11 percent (American Nurses Association, 2014). The aim of this qualitative narrative study is to explore the perception of stereotyping by male nurses over time and to ascertain if there has been a change in the male’s perception of the phenomenon.

To this end, the research question is as follows: What are the effects of stereotyping on the perceptions of male nurses from the years 1970 through 2017? The purpose of this qualitative exploratory narrative analysis is to examine the phenomena of male nurse stereotyping as experienced by men in nursing within the context of time. Using a narrative approach, a snowball sample of male nurses was applied. The nurses related their personal recollections and experiences of being a male in a female-dominated profession. Each interview used a narrative approach to elicit the stories from the participant’s career progression. Participants were specifically recruited from careers that spanned five decades. The men were asked to focus on what was occurring in society from their point of entry into the profession and to compare it to 2019. The selection of participants was divided into ten-year increments starting from 1970-1979 and ending in 2017 (seven-year increment for the last group). Three men were interviewed from 1970-79, 1980-89, and 2010-2017 cohorts; four men were from the 1990-1999 and 2000-2009 cohort. A total of seventeen nurses were interviewed.

The interviews were recorded and transcribed. A narrative analysis using Catherine Riessman’s (1993) method of thematic analysis was applied to identify patterns of the lived personal positive and negative experiences of male nurses.

This study was conducted to determine if the perception of gender bias and stereotyping for males has changed over time. Although present in each of the decades, there was some variation. Regardless of the decade analyzed, the effect of stereotyping varied from male to male. As an example, in some of the participants from the older cohorts, bias was not perceived at all whereas, in some of the younger participants it was. There were two notable findings. First, as time went on, there were fewer vocalizations of stereotyping, and when it did occur, it was often in the form of “joking or teasing.” Most of the men agreed that gender bias and stereotyping has become less of an issue or not a factor at all. Secondly, some of the issues that the men spoke of have a historical connection to the literature on male nurse stereotyping. These issues were echoed in the interviews of the men in this study.

Some of the issues revealed have more significance than others. Some of the more serious issues include males feeling inadequate or fearful in caring for females, particularly younger females. Male treatment by faculty or staff during their obstetrical rotations was an issue for the older cohorts more than the younger ones. Males being asked to lift and move patients more often than their female colleagues occurred across the continuum. Males were considered professionally misplaced, often asked, “Why are you not a doctor?” Some unanticipated findings were in regard to the male’s female colleagues. The men vocalize their observation of biases against female nurses, noting how providers often spoke differently (negatively) toward female nurses. Furthermore, men were often assumed to be in charge because of their gender and traditional societal gender roles, which could be advantageous.

Description
This dissertation has also been disseminated through the ProQuest Dissertations and Theses database. Dissertation/thesis number: 27541843; ProQuest document ID: 2309521450. The author still retains copyright.
Repository Posting Date
2021-08-30T12:54:26Z
Notes
This item has not gone through this repository's peer-review process, but has been accepted by the indicated university or college in partial fulfillment of the requirements for the specified degree.
Type Information
Category Information
Degree Information
Rights Holder