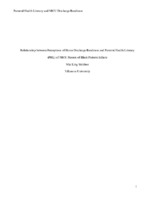 The citations below are meant to be used as guidelines. Patrons must make any necessary corrections before using. Pay special attention to personal names, capitalization, and dates. Always consult appropriate citation style resources for the exact formatting and punctuation guidelines.
Item Information
Item Link - Use this link for citations and online mentions.
http://hdl.handle.net/10755/21927
Abstract

Purpose: The purpose of the study was to explore the relationships between levels of PHL, perceived discharge teaching effectiveness and parental readiness to provide care for their Black preterm infants at home after discharge from the Neonatal Intensive Care Unit (NICU) with parent and infant demographics.

Methods: A descriptive approach was used for this study of parents of Black preterm infants from a Level IV NICU, located in an urban area. Qualitative analysis of the perceptions of the parents, prior to NICU discharge, was via semantic content analysis of interview data organized into thematic categories for cluster analysis. The framework guiding the study was the revised Kenner Transition Model (Boykova & Kenner, 2012) which was developed specifically for NICU parents. Quantitative analyses of relationships among the variables using parent scores from the Parent Health Activities Test (PHLAT), Transition Questionnaire (TQ) and Quality of Discharge Teaching Survey (QDTS) were completed using descriptive statistics (Boykova & Kenner, 2012; Kumar et al., 2010; Weiss et al., 2008).

Results: The study sample of ten parents had high (50%) or moderate (30%) PHL; high (30%) or moderate (50%) transition readiness and high (20%) or moderate (40%) perceptions of the quality of discharge teaching as measured by the PHLAT, TQ and QDTS. Qualitative analysis of parent data affirmed all five domains of the revised Kenner Transition framework; ‘Informational Needs’ and ‘Professional Support’ were the domains unanimously endorsed by coded parent responses. A sub-group of demographically similar NICU mothers described a markedly negative experience with healthcare staff that may indicate the presence of stereotyping and/ or implicit biases.

This dissertation has also been disseminated through the ProQuest Dissertations and Theses database. Dissertation/thesis number: 27736021; ProQuest document ID: 2354894821. The author still retains copyright.