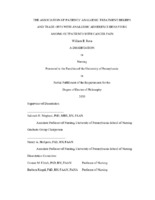 The citations below are meant to be used as guidelines. Patrons must make any necessary corrections before using. Pay special attention to personal names, capitalization, and dates. Always consult appropriate citation style resources for the exact formatting and punctuation guidelines.
Item Information
Item Link - Use this link for citations and online mentions.
http://hdl.handle.net/10755/21913
Abstract

Pain is one of the most burdensome symptoms for patients with cancer. Per cancer pain guidelines, opioids remain one of the primary modalities for managing moderate to severe cancer pain. Analgesic nonadherence is common among cancer patients despite unmanaged pain symptoms. We investigated how patients prioritized analgesic treatment beliefs for cancer pain and whether those beliefs predicted objective analgesic adherence behaviors.

This is a secondary analysis of an existing dataset (n=207) that used a three-month prospective observational design. Subjects were from outpatient oncology clinics of a large Philadelphia health system and were > 18 years, self-identified as African-American or White, diagnosed with solid tumor or multiple myeloma, and prescribed at least one around-the-clock analgesic for reported cancer pain.

Initial results showed beliefs weigh significantly in subjective analgesic trade-offs. We identified two distinct belief clusters. Side effect severity was the only variable that significantly differed between clusters. Subjects mostly traded-off based on the belief, ‘pain medicines keep you from knowing what is going on in your body.’ Addiction was not a top priority. Belief clusters did not predict analgesic adherence. However, in an adjusted analysis, it was the experiential variables (e.g., side effects, most potent analgesia, pain relief with analgesics, duration of disease), as well as patients’ race, that were statistically significant in explaining analgesic adherence.

Our findings suggest that experiential variables rather than analgesic beliefs were associated with analgesic adherence in this sample of cancer outpatients. Additional studies should explore patients’ cancer pain self-management practices while considering patient, provider, and system/ structural factors to optimizing cancer pain management.

Funder(s)
The American Cancer Society
Description
This dissertation has also been disseminated through the ProQuest Dissertations and Theses database. Dissertation/thesis number: 27957232; ProQuest document ID: 2423436576. The author still retains copyright.
Repository Posting Date
2021-08-12T16:13:46Z
Notes
This item has not gone through this repository's peer-review process, but has been accepted by the indicated university or college in partial fulfillment of the requirements for the specified degree.
Type Information
Category Information
Degree Information
Rights Holder