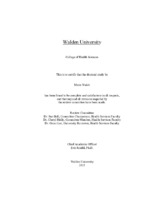 The citations below are meant to be used as guidelines. Patrons must make any necessary corrections before using. Pay special attention to personal names, capitalization, and dates. Always consult appropriate citation style resources for the exact formatting and punctuation guidelines.

The number of deaths due to medical errors in hospitals ranges from 44,000 to 98,000 yearly. More than 7,000 of these deaths have taken place due to medication errors. This project evaluated the implementation of an automated medication dispensing cabinet or PYXIS machine in a 25-bed upper Midwestern critical access hospital. Lewin's stage theory of organizational change and Roger's diffusion of innovations theory supported the project. Nursing staff members were asked to complete an anonymous, qualitative survey approximately 1 month after the implementation of the PYXIS and again 1 year later. Questions were focused on the device and its use in preventing medication errors in the hospital. In addition to the surveys that were completed, interviews were conducted with the pharmacist, the pharmacy techs, and the director of nursing 1 year after implementation to ascertain perceptions of the change from paper-based medication administration to use of the automated medication dispensing cabinet. Medication errors before, during, and after the PYXIS implementation were analyzed. The small sample and the small number of medication errors allowed simple counts and qualitative analysis of the data. The staff members were generally satisfied with the change, although they acknowledged workflow disruption and increased medication errors. The increase in medication errors may be due in part to better documentation of errors during the transition and after implementation. Social change in practice was supported through the patient safety mechanisms and ongoing process changes that were put in place to support the new technology. This project provides direction to other critical access hospitals regarding planning considerations and best practices in implementing a PYXIS machine.

This dissertation has also been disseminated through the ProQuest Dissertations and Theses database. Dissertation/thesis number: 3684502; ProQuest document ID: 1660759268. The author still retains copyright.