Premature birth has risen steadily over the last decade resulting in an increased number of infants needing neonatal intensive care. The demand for neonatal intensive care has lead to many improvements in the delivery of such care with an increase in the survival of the smallest and most premature infants. However, most of these infants are being discharged from neonatal intensive care units (NICU) with severe extrauterine growth restriction (EUGR). Extremely low birth weight (ELBW) infants born at 23-27 weeks gestation and who have a weight of less than 1,000 grams are at the highest risk for EUGR because of their low birth weight and extreme prematurity. The need for prolonged mechanical ventilation and blood pressure support delays the ELBW infant from receiving needed amounts of early nutrition during the first few weeks of life. This lack of early nutrition leads to large and ongoing energy and protein deficits, which have been cited as the leading cause of EUGR in the ELBW infant. Despite current evidence that supports the administration of early aggressive nutrition in the ELBW infant to improve extrauterine growth, clinical practice remains largely unchanged. The Institute of Medicine (IOM) in its 2008 report states that the use of evidenced based clinical practice guidelines (CPG) has the potential to reduce undesirable practice variation thereby eliminating the use of ineffective interventions. Developing evidenced based CPGs utilizing a systematic, rigorous and transparent process will serve to standardize practice while improving clinical outcomes. Therefore, the purpose of this doctoral project is to provide an evidence based CPG on the nutritional management of the ELBW infant. The CPG includes evidence based recommendations that are centered on promoting adequate extrauterine growth during the NICU stay in order to prevent EUGR in the ELBW infant. 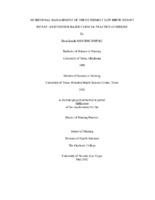