Purpose/Background: Nurses are a major component of disaster response and need to understand their roles in preparing and responding to a disaster. Limited evidence regarding educating undergraduate nursing students for disasters exists. An interdisciplinary disaster drill was developed and implemented in a university nursing program. Nursing students in the community and rural health nursing course were the responders. The purpose of this project was to obtain student evaluation of the disaster drill after their graduation from the nursing program. Method A 10-question survey was developed early in 2015 using a 5-point Likert scale with categories from strongly agree to strongly disagree. The survey was sent to the student responders from 2014 and 2015 (44 in total) via an online free survey platform approximately three months after their disaster drill. Results Response rate for the class of 2014 was 88% and 72% for the class of 2015. Over 90% of each class agreed or strongly agreed that the purpose of the disaster drill was clear. From 2014, only 50% of the students felt that the preparation information assisted them with the drill. Preparation information was changed for the 2015 drill and 66% felt it helped to prepare them for the drill. From the class of 2014, 79% agreed or strongly agreed the disaster drill was realistic while 67% of the class of 2015 felt this way. Discussion/Conclusion Preparation information given to students needs to continue to be adjusted to determine the correct amount of information without giving the specifics of the drill. Adaptation of the disaster drill scenarios to provide a more realistic experience for the students is ongoing. Nursing faculty can implement disaster drills in their nursing program using the knowledge gained in this project. 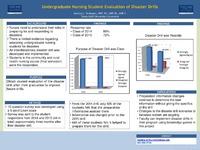