The purpose of this phenomenological study was to explore the meaning that acute care, bedside nurses’ assign to their autonomous actions. A feminist critique of the nursing work environment was applied using standpoint theory. This was balanced and supplemented by a post-modern critique using Foucault’s method of assessing power and knowledge in relation to the discipline of a profession. This study was designed to explore how issues of gender, knowledge, and power affected participants’ interpretations of their autonomous actions. This study used a qualitative, phenomenological approach with an emergent design. Purposive sampling was used to find registered nurses currently working in acute care settings and whose only form of practice was the provision of direct patient care. 10 Participants were recruited by email and snowball sampling and were from a wide variety of specialty areas. Data were collected using three semi-structured interviews. Each participant was interviewed three times, which allowed for an in-depth exploration of the issues of autonomy, gender, and power. The interviews were audio-recorded and then transcribed verbatim. The transcribed interviews were analyzed using DEDOOSE™, a web-based qualitative data management software program designed to facilitate analysis of qualitative data. Participants revealed that the context in which they acted was crucial to their autonomy. Poor nurse-physician relationships and fear created a negative context in which autonomy was inhibited while trust and respect created an environment in which autonomy could flourish. For these participants autonomy meant that they were able to do the right thing for their patients and it led to positive patient outcomes. Participants felt that gender issues negatively impacted their relationships with physicians which in turn negatively impacted their autonomy. While most participants discussed the positive benefits of nurse empowerment they had largely negative reactions to power in general. The purpose of this study was to understand the impact of gender and power on the autonomous decisions and practice of bedside nurses. It is clear that gender issues impact nurses’ work environments. Developing policies to improve nursing autonomy will require that we understand the social and political context in which these actions occur. 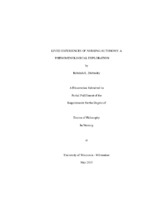