The effects of the Human Immunodeficiency Virus (HIV) global epidemic continue to emerge decades after the first wave of infection. One key aspect of the HIV epidemic that is significantly impacted by culture and knowledge of HIV transmission is stigma, specifically HIV/AIDS related stigma and discrimination (HASD). The Caribbean region has the second highest HIV prevalence rate in the world. In 2011, there were approximately 13,000 new infections and 10,000 AIDS related deaths among adults and children in the Caribbean. Three Anglophone nations significantly impacted by the HIV epidemic are Guyana, Trinidad and Tobago and Jamaica. HASD has been identified as a significant determinant of HIV transmission among members of the Anglophone Caribbean population. With the disproportionate spread of HIV among Anglophone Caribbean women, an exploration of ecological factors unique to this population is needed to understand predictors of HASD. Using secondary data from the United Nations Children's Fund (UNICEF) Multiple Indicators Cluster Survey – 3, the purpose of this study was (a) to conduct a cross national comparison of knowledge of HIV prevention, history of HIV testing and HASD and (b) to explore predictors of HASD towards people living with HIV among Anglophone Caribbean women who reside in Guyana, Trinidad and Tobago and Jamaica. The total size of the sample was 13,287 records of women between the ages of 15-49 years. Women in Guyana had lower knowledge of HIV transmission and higher HASD than women in Trinidad and Tobago and Jamaica. Personal characteristics (age, level of education, and country of residence) and knowledge of HIV transmission were found to account for variance in HASD among the sample population. Domestic partnership and HIV test were not found to be significant contributors to the model designed in this study. Future study implications include further exploration of multiple factors that can contribute to HASD among populations in the Caribbean region. The development of interventions that not only factor in cultural differences but also gender, education, and socioeconomic differences may be more effective in managing and reducing the HIV epidemic in the Caribbean region.

Popular Works for Hires, Kimberly A. by View 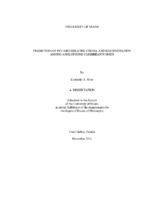