The purpose of this study was to explore the themes that affected the day-to-day health-related decision making of African Americans managing coronary heart disease (CHD). Understanding the lived experience of African Americans with CHD can offer health care providers additional strategies to improve disease management. A hermeneutic phenomenological approach was utilized to explore: (1) what is the lived experience of managing CHD among older African Americans? (2) What is the essence of health-related decision making among older African Americans living with CHD? Two audio taped 30 to 60 minute open ended in-depth interviews per participant. Purposive sampling resulted in eight African Americans male = 4; female = 4 over age 45 admitted with acute coronary syndrome (ACS) to a large metropolitan hospital. Bracketing and phenomenological reduction elicited units of general meaning and allowed openness of the themes that emerged. The results of this study indicate that the lived experience of African Americans with newly diagnosed CHD respond similar to other racial/ethnic groups. In this study a new functional limitation was almost certain for older African Americans recovering from an ACS. Physical limitations led to feelings of loss of freedom, loss of control, and symptoms of depression. African Americans seem to have a different manifestation of depressive symptoms. Females were more likely to lack sources of support. Although the practice environment was not the focus of this study, it is important to note that national guidelines for reducing health disparities related to CHD had been implemented in the clinical setting. The data support the idea that culture is influential in health-related decision making. More importantly, the African Americans in this small sample demonstrated self-management skills and viewed their provider as partners in disease management. The majority of participants had established primary care providers whom they visited regularly. Participants verbalized medical trust. 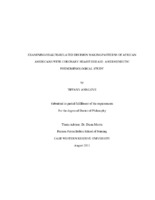