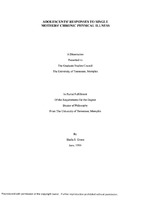 The citations below are meant to be used as guidelines. Patrons must make any necessary corrections before using. Pay special attention to personal names, capitalization, and dates. Always consult appropriate citation style resources for the exact formatting and punctuation guidelines.
Item Information
Item Link - Use this link for citations and online mentions.
http://hdl.handle.net/10755/20889
Abstract
The purpose of this study was to describe selected concepts of adolescents living with a single, chronically physically ill mother and to examine the self-concept of these adolescents and the relationship of the self-concept to the perception of the family environment. The family environment from the mothers' and the adolescents' perspectives is described. An additional purpose of this study was to examine the congruence of the mothers' and adolescents' perceptions of the family environment. Using a descriptive-correlational paired sample design, two groups were established. Both groups were single mothers with adolescents in the home. Group I consisted of 30 adolescents with chronically physically ill mothers, Group I was comprised of 30 healthy single mothers with adolescents. The 30 mothers in Group I were diagnosed with autoimmune diseases (n = 12), cancer (n = 10), or miscellaneous diagnoses (n = 8). The mean age of the adolescents was 14.5 years in each group. There were 15 males and 15 females in each of the groups. Family incomes were bimodal, with equal numbers having incomes of $20,001 to \$30,000 annually and $40,001 or more annually. The self-concept of the adolescents in Group I (n = 30) was found to be significantly lower (p = .0001) than the adolescents in Group II (n = 30). The adolescents in Group I perceived their family environments significantly less positively (p = .0340) than the adolescents in Group II. The Relationship Dimensions of the FES was significantly lower (p = .0053) for the adolescents in Group I than in Group II. There was not a significant difference in the Personal Growth (p = .1133) or the System Maintenance (p = .4089) Dimensions of the FES when the adolescent groups were compared. The perception of the family environment did not correlate (p = .24) with the self-concept of the adolescents in the families with single, chronically physically ill mothers. The perception of the family environment significantly correlated with the self-concept scores in the homes with single healthy mothers in the Relationship Dimension (p =.005), and the Personal Growth Dimension (p =.0001), but not in the System Maintenance Dimension (p =.50). There was significantly more incongruence found between the adolescents and mothers in Group I responses to the FES than was found in Group II adolescent and mother dyads (Group I = 6.93, Group II = 9.35, p =.004). Adolescents and mothers in Group I were interviewed. The single, chronically physically mothers were asked, "What impact or effect do you think you illness has had on your family?" The second question asked of these mothers was, "What impact or effect do you think your illness has had on your family?" The adolescents of these mothers were asked two questions. The first question, "What impact or effect do you think your mother's illness has had on your life?". The second question asked of the adolescents was "Do you think your life is any different than your peers?" It is concluded that with the significantly lower self-concept and perception of family environment in the adolescents living with single, chronically physically mothers, nursing needs to further study.
Description
This dissertation has also been disseminated through the ProQuest Dissertations and Theses database. Dissertation/thesis number: 9630424; ProQuest document ID: 304355840. The author still retains copyright.
Repository Posting Date
2020-08-07T20:35:54Z
Notes
This item has not gone through this repository's peer-review process, but has been accepted by the indicated university or college in partial fulfillment of the requirements for the specified degree.
Type Information
Category Information
Degree Information
Rights Holder