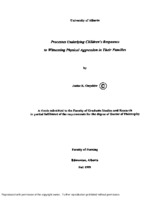 The citations below are meant to be used as guidelines. Patrons must make any necessary corrections before using. Pay special attention to personal names, capitalization, and dates. Always consult appropriate citation style resources for the exact formatting and punctuation guidelines.
Item Information
Item Link - Use this link for citations and online mentions.
http://hdl.handle.net/10755/20887
Abstract
According to the National Longitudinal Survey of Children and Youth (NLSCY), 8% of Canadian children aged 4 to 11 years have witnessed physical aggression in their families. This study used structural equation modeling to test the hypotheses that intra-family aggression affects children: (1) because of observational learning/modeling of aggressive behaviour, and (2) because intra-family aggression disrupts mother's ability to provide warm, responsive parenting. The study examined whether there were effects due to the child's age or gender, and if there were differences depending on whether the information was provided from the mother or the child. The sample included 3,014 preschool (4 to 5 years), 5,553 young school-age (6 to 9 years), and 2,654 older school-age (10 to 11 years) children. Mothers provided information for both parent and child variables for all children and 2,174 of the older school-age children self-completed their own questionnaires. Results showed that the theoretical perspectives provide a reasonable explanation for understanding the processes underlying children's adjustment. Children who witnessed aggression more frequently behaved more aggressively themselves. Children were also affected because mothers were less able to provide warm, responsive parenting. Less maternal responsiveness was associated with an increase in both physical and indirect aggression (i.e., manipulative behaviour), internalizing behaviours, and a decrease in prosocial behaviours in children. Depressive symptoms in mothers contributed to children's internalizing behaviours. Children who were more sad, withdrawn, and depressed behaved more aggressively. There were more similarities than differences in children's adjustment in the different age groups. Across all age groups, boys used more physical aggression, less indirect aggression, and were less socially competent than girls. Gender did not influence children's internalizing behaviours. The model explained 25.5% to 33.6% of the variance in physical aggression, 15.1% to 26.9% in indirect aggression, 15.0% to 17.4% in internalizing behaviours, and 12.6% to 18.9% in prosocial behaviours for children in the different age groups. The model had a better fit when the data used were provided by mothers rather than both mothers and children because of the divergence between mothers' and children's reports.
Description
This dissertation has also been disseminated through the ProQuest Dissertations and Theses database. Dissertation/thesis number: NQ46899; ProQuest document ID: 304546224. The author still retains copyright.
Repository Posting Date
2020-08-07T20:28:05Z
Notes
This item has not gone through this repository's peer-review process, but has been accepted by the indicated university or college in partial fulfillment of the requirements for the specified degree.
Type Information
Category Information
Degree Information
Rights Holder