Meta-analysis on costing out nursing services 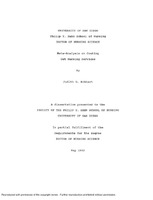