Suicide among United States military personnel has doubled since 2002, and in 2008, the military suicide rate topped the general population rate for the first time in history. Realizing the enormity of the problem, Congress appropriated over one billion to fund veteran suicide prevention programs between 2005 and 2016. Unfortunately, despite their best efforts, the suicide rate for veterans rose a staggering 80% during this time-frame, necessitating the need to explore innovative and forward-thinking approaches that might mitigate the crisis. Researchers are studying the clinical relevance between morally transgressive actions and the increase in self-harm. Moral Injury (MI) is a relatively new term, being used to explain the mental anguish created by the complex and chaotic environment of combat. Thus, validation of the concept of MI in veteran healthcare may lead to enhanced understanding, improved screening, and treatment for those affected. 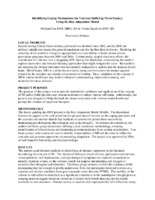