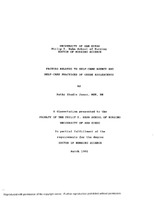 The citations below are meant to be used as guidelines. Patrons must make any necessary corrections before using. Pay special attention to personal names, capitalization, and dates. Always consult appropriate citation style resources for the exact formatting and punctuation guidelines.
Item Information
Item Link - Use this link for citations and online mentions.
http://hdl.handle.net/10755/20817
Abstract
Identification of factors that influence obese adolescents' health behaviors is necessary if obese adolescents are to benefit from therapeutic interventions. The purpose of this descriptive-correlational study was to identify the relationships between selected basic conditioning factors (BCFs)--perceived health status (PHS), perceived self-efficacy (PSE), family satisfaction (FS), and life events (LE)--and the self-care agency (SCA) and self-care practices (SCP) among obese adolescents. The relative predictive strength of each BCF in relation to the outcome variables was also explored. Orem's self-care theory provided the conceptual framework for this study. The convenience sample of 100 obese adolescents included campers from two southern California weight loss camps and noncampers who were recruited through health professionals. Data were collected using six self-report questionnaires: a Cantril Ladder, PSE scale, FS scale, LE scale, Denyes SCA instrument, and the Personal Lifestyle Questionnaire. Descriptive statistics were used to describe the sample and the study variables. Pearson product-moment correlations, t-tests, analysis of variance, and multiple regression were used to analyze the data. Point-biserial correlations, t-tests, and chi-square analyses were used for supplemental data analysis. Moderately weak but statistically significant positive relationships were found between PHS, PSE, FS, and SCA, and between PHS, PSE, FS, SCA, and SCP. A weak inverse relationship was found between LE and SCA. BCFs were found to explain 32% of the variance in SCA while BCFs and SCA explained 34% of the variance in SCP. PHS and PSE were the strongest predictors of SCA, while PHS and SCA were the strongest predictors of SCP. There were no differences between young, middle, and older adolescents in relation to any of the study variables; however, mildly obese adolescents were found to engage in significantly more SCPs than severely obese adolescents. Conclusions drawn from the findings indicate that obese adolescents with higher PSE tend to be more effective self-care agents, those with higher PHS, PSE, and SCA tend to engage in more SCP, and that these characteristics need to fostered in an integrated way. Recommendations were made for further research.
Description
This dissertation has also been disseminated through the ProQuest Dissertations and Theses database. Dissertation/thesis number: 9125236; ProQuest document ID: 303975017. The author still retains copyright.
Repository Posting Date
2020-07-16T20:31:59Z
Notes
This item has not gone through this repository's peer-review process, but has been accepted by the indicated university or college in partial fulfillment of the requirements for the specified degree.
Type Information
Category Information
Degree Information
Rights Holder