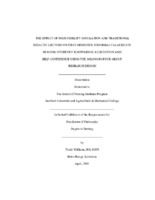 The citations below are meant to be used as guidelines. Patrons must make any necessary corrections before using. Pay special attention to personal names, capitalization, and dates. Always consult appropriate citation style resources for the exact formatting and punctuation guidelines.
Item Information
Item Link - Use this link for citations and online mentions.
http://hdl.handle.net/10755/20593
Abstract

Nurse educators are challenged with preparing nurses to practice in complex Health care settings. Nursing graduates often feel unprepared to meet the performance expectations placed on them by the Health care industry, displaying a lack of self-confidence and knowledge. The purpose of this study was to test the effectiveness of high-fidelity simulation (HFS) as a teaching pedagogy on first semester, junior baccalaureate nursing students (N = 98) enrolled at an HBCU in southeast Louisiana. More specifically, this study examined the effect of the independent variables, traditional didactic lecture and (an HFS-focused respiratory physical assessment scenario) intervention, on the dependent variables, knowledge acquisition and perceived self-confidence. Kolb's Experimental Learning Theory was used to guide this research. This study utilized a Solomon Four research design. ANOVA, ANCOVA, main effects tests, t-tests, Pearson correlation coefficients and Kendall's tau were used to test hypotheses. Descriptive statistics were used to summarize demographic information and scores from the Self-Confidence in Learning (SCIL) scale, and the HESI Specialty exam (knowledge acquisition). Students were randomly assigned into four groups, consisting of two experimental groups (E1, E2) and two control groups (C1, C2). The pretest (HESI), HFS intervention, and two posttests (HESI and SCIL) were given to experimental group E1), whereas experimental group E2 received the intervention and posttests only (HESI and SCIL). Control group C1 received the pretest (HESI) and posttest (HESI), and control group C2 received only the posttest (HESI).Selected demographic variables of the students did not have a significant relationship with SCIL and knowledge acquisition. Four research hypotheses were tested in this study. Findings related to null hypothesis 1 revealed that there were no statistically significant differences in pre-test and post-test knowledge acquisition scores for the junior-level baccalaureate nursing students who received the HFS intervention plus didactic lecture compared to those who received the didactic lecture only. Findings related to null hypothesis 2 determined that the mean scores of self-confidence of the two experimental groups (E1 and E2) were high, indicating a high level of self confidence among students participating in these two groups. However, an analysis of variance revealed that the group effect on the (SCIL) scores was not significantly different [F (1, 45) = 0.549, p = 0.463]. Hypothesis 3 was tested using Pearson product-moment correlation coefficient. Findings revealed that a statistically significant correlation did exist between knowledge acquisition and self-confidence as measured by the SCIL questionnaire and HESI Specialty exam. Moreover, SCIL was positively correlated [r (47) = .277, p = .030] with performance on HESI post test scores, indicating that as the student's self-confidence increased, their knowledge acquisition also increased. Findings related to null hypothesis four revealed that a correlation did not exist between the demographic variables of age, gender, first time enrollment in Health Deviations I, and overall cumulative grade point average (GPA), SCIL, and knowledge acquisition (measured by the HESI post-test). Findings from this study have relevant implications for nursing education. The use of HFS is increasing as a popular teaching and learning pedagogy and an innovative way to increase knowledge acquisition and self-confidence in students. However, study findings caution against the use of HFS as a standalone teaching modality. Rather, educators should consider incorporation of other teaching and learning modalities with the use of HFS. Study findings also highlight the role of HFS in improving self-confidence and knowledge in undergraduate nursing students. Further, nurse educators should consider exposing students to this teaching tool earlier rather than later in their matriculation through the nursing program.

This dissertation has also been disseminated through the ProQuest Dissertations and Theses database. Dissertation/thesis number: 3689580; ProQuest document ID: 1679282842. The author still retains copyright.