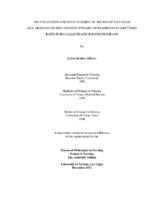 The citations below are meant to be used as guidelines. Patrons must make any necessary corrections before using. Pay special attention to personal names, capitalization, and dates. Always consult appropriate citation style resources for the exact formatting and punctuation guidelines.
Item Information
Item Link - Use this link for citations and online mentions.
http://hdl.handle.net/10755/20585
Abstract
Due to a desire to better prepare BSN students for the Nurse Council Licensure Examination for Registered Nurses (NCLEX-RN®) and to increase first-time pass rates, nursing programs across the US are using predictive testing to implement policies that require students to pass a standardized exit exam to graduate (National League for Nursing, 2010). Evolve Learning Systems owned by Elsevier, Inc. offers such an exit exam named the HESI E2, which recommends a benchmark score to predict success on the NCLEX-RN®. To offset an expected decrease in NCLEX-RN® pass rates due to recent changes in the passing standard, BSN program faculty may consider implementing a graduation requirement using predictive exams such as the HESI E2, to motivate students to better prepare for NCLEX-RN®. From a student’s perspective, a requirement to pass a single exam to graduate may seem unfair, after spending time and money for an education. A single high stakes exam can cause pronounced individual student personal and social stress (Spurlock & Hunt, 2008). Adult Education Theory and Classical Test Theory were used as a conceptual framework to design this quasi-experimental retrospective study. A large sample of BSN student graduates and potential graduates from nursing programs across the US that may or may not incorporate the HESI E2 exit exam as part of their curriculum were examined. The sampling of this study is hierarchical in that graduate BSN students were sampled within graduation periods of BSN programs and BSN programs were sampled within the population of BSN programs in the United States. The purpose of the study was threefold. The first purpose compared the NCLEX-RN® first-time pass rates of BSN students in nursing programs that use the HESI E2 exit exam with other computerized exit exams, and those using no exit exam. NCLEX-RN® first-time pass rates for students taking HESI E2 did not show a statistically significant increase compared to students that took no exit exam. The results would suggest that the education acquired in nursing school prepares students adequately for the NCLEX-RN® without the use of a standardized exit exam. It may also be that the assessment results provided by the HESI E2 are not being utilized by the BSN students to better prepare for NCLEX-RN®. A second purpose, compared NCLEX-RN® first-time pass rates of BSN students in nursing programs utilizing the E2 that require a minimum benchmark score as a graduation requirement with those BSN students that use HESI E2 but are not subjected to this requirement. The results from this study did show a statistically significant increase in NCLEX-RN® first-time pass rates for students in BSN programs in the South and West, regions of the US that used the E 2 minimum benchmark score as a graduation requirement. The third purpose was to determine an estimated percentage of BSN students that would have actually failed NCLEX-RN® among students that failed to graduate because of a failure to meet an E2 minimum benchmark score. Application of an algorithm, designed by the author, revealed that E 2 predicted failure on NCLEX-RN® 73% of the time. This finding did not agree with a previous study by Spurlock and Hanks (2004), which stated that E2 was good at predicting success on NCLEX-RN ® but was not able to predict failure 81% of the time. In other words, 81% students that failed to pass E2 went on to pass NCLEX-RN®. Their study did not consider the motivator of a graduation requirement, and when this was included in this study, the result was very different: only 27% of the students that failed E2 would have passed NCLEX-RN® and 73% would have failed NCLEX-RN ®. Lauchner et al. (2006), Morrison et al. (2002), Newman et al. (2000) Nibert & Young (2001), and Nibert et al. (2002) offer evidence that HESI E2 exit exam has predictive value in predicting success on NCLEX-RN®. The results of this study agree with their assertion and offers new information in that the HESI E2 exit exam has value in predicting failure on NCLEX-RN® when a motivator such as a graduation requirement is in place. Although this study did reveal that HESI E2 exit exam was accurate at predicting failure, nursing faculty are advised to consider the profound impact of a “high stakes” exam on a student’s livelihood. Recommendations from this study suggest that the use of the predictive value of HESI E 2 exit exam in nursing programs be only part of a constellation of evaluation criteria to assist BSN students to prepare to pass NCLEX-RN ®.
Description
This dissertation has also been disseminated through the ProQuest Dissertations and Theses database. Dissertation/thesis number: 3498280; ProQuest document ID: 927935690. The author still retains copyright.
Repository Posting Date
2020-05-06T17:30:49Z
Notes
This item has not gone through this repository's peer-review process, but has been accepted by the indicated university or college in partial fulfillment of the requirements for the specified degree.
Type Information
Category Information
Degree Information
Rights Holder