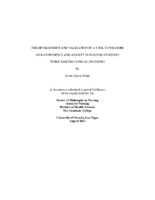 The citations below are meant to be used as guidelines. Patrons must make any necessary corrections before using. Pay special attention to personal names, capitalization, and dates. Always consult appropriate citation style resources for the exact formatting and punctuation guidelines.
Item Information
Item Link - Use this link for citations and online mentions.
http://hdl.handle.net/10755/20410
Abstract
Clinical decision making (CDM) is a cornerstone skill for nurses. Self-confidence and anxiety are two affective influences that impact the learning and adeptness of CDM. Currently, no instruments exist that measure perceived self-confidence and anxiety level of undergraduate nursing students related to CDM. The purpose of this research was to develop, test, and establish psychometric properties for a quantitative instrument that measures the levels of self-confidence and anxiety experienced by undergraduate nursing students while making clinical decisions. The new tool is entitled the Nursing Anxiety and Self-Confidence with Clinical Decision Making (NASC-CDM) scale. The tool is a self-report, Likert-type instrument with two subscales measuring levels of self-confidence and anxiety. Bandura‟s social cognitive theory, regarding self-efficacy and anxiety arousal framed the study along with two embedded nursing models which explain the relationship between self-confidence, anxiety, and CDM. Content validity and face validity were established through critique by a panel of internationally known experts in the area of CDM and by a panel of undergraduate student nurses and registered nurses. Two samples of pre-licensure associate and baccalaureate nursing students participated in either the pilot- (fall 2010, n = 303) or iv main-testing (spring 2011, n = 242) phase of the study to test the scale. Exploratory factor analysis was used to examine the scale‟s construct validity. Items were reduced from the scale based on EFA results from each sample. Similar factor structures were found between the two samples, indicating a stable three dimensional scale. The self-confidence and anxiety subscales of the NASC-CDM scale were correlated with two psychometrically sound instruments to examine convergent validity. Pearson r correlation coefficients examined the relationship between the self-confidence subscale and the General Self-Efficacy (GSE) scale. Results were positive, moderate and significant at .54 and .62 for the fall and spring samples respectively. Pearson r correlation coefficients examined the relationship between the anxiety subscale and the Generalized Anxiety Disorder-7 (GAD-7) scale. Results were positive, low to moderate and significant at .52 and .38 for the fall and spring samples respectively. Internal consistency reliability was assessed using Cronbach‟s alpha reliability coefficient. Alpha coefficients for the final version were: self-confidence subscale, α = .97 and anxiety subscale, α = .96. Results of the study provided initial evidentiary support for the NASC-CDM scale as a content valid, construct valid, convergent valid and reliable measurement tool. Findings of the study have important implications for nursing education. Nurse educators may be able to utilize the NASC-CDM scale in numerous situations, around real-life or simulated clinical experiences. If nurse educators are aware of how affective states, such as levels of self-confidence and anxiety, influence nursing students while moving through the process of making clinical decisions, they can intervene more effectively and facilitate students learning the vital skill of CDM.
Description
This dissertation has also been disseminated through the ProQuest Dissertations and Theses database. The author still retains copyright.
Repository Posting Date
2020-03-23T18:35:17Z
Notes
This item has not gone through this repository's peer-review process, but has been accepted by the indicated university or college in partial fulfillment of the requirements for the specified degree.
Type Information
Category Information
Degree Information
Rights Holder