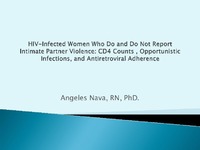 The citations below are meant to be used as guidelines. Patrons must make any necessary corrections before using. Pay special attention to personal names, capitalization, and dates. Always consult appropriate citation style resources for the exact formatting and punctuation guidelines.
Item Information
Item Link - Use this link for citations and online mentions.
http://hdl.handle.net/10755/201999
Abstract

Introduction: The purpose of this study was to document the impact on HIV dissease progression, measured as CD4 counts, number of opportunistic infections, viral replication, and adherence to antiretroviral medication for HIV-infected women who do and do not report partner violence. Although both HIV infection and partner violence affect millions of women worldwide, research is lacking on the impact of violence on the health of women with HIV. Once the relationship of IPV and HIV disease progression is documented evidence-based interventions can be designed and tested.

Methods: A non-experimental, comparative, descriptive design was used. HIV-infected women receiving care at an HIV specialty clinic were interviewed using the validated Severity of Violence Against Women Scale, the Danger Assessment Scale, and the Domestic Violence Specific-Moriskey Medication Adherence Scale instruments. Number of opportunistic infections, CD4 counts, and viral replication were abstracted from the electronic medical records. We hypothesized that HIV-infected women who reported IPV in the past 12 months would have greater disease progression evidenced by lower mean CD4 counts, more opportunistic infections, lower antiretroviral adherence and more detectable viral replication than women who did not report IPV.

Discussion/Conclusions: Partner violence in HIV-infected women is associated with greater disease progression and less adherence to antiretroviral treatment. This research provides documentation for the need for HIV-infected women to be screened for partner violence and the design and testing of interventions to promote optimal HIV self-management and medication adherence and minimize disease progression.