Caring in Nursing Practice: A Concept that Transcends Gender

(41st Biennial Convention) Nurses who are male represent approximately six percent of the nursing workforce in the United States. This minority representation begins in nursing education programs and extends into practice. This finding is not unique to the United States. Throughout the world, men represent a minority population in the nursing profession. As the profession seeks to recruit and retain qualified individuals, while also embracing a diverse workforce, a study was undertaken which investigated a population whose voice has not been actively solicited in the literature, that of practicing registered nurses who are male. Using descriptive naturalistic inquiry the research question was "What is the essence of nursing as perceived by practicing registered nurses who are male?" Purposive sampling was used to recruit eleven practicing male nurses. Individual interviews were conducted, audiotaped, and transcribed verbatim. Data were collected until data saturation was reached. Transcripts were coded and analyzed through qualitative content analysis. Trustworthiness was established by prolonged engagement, peer debriefing, and member checks. The metatheme, 'Nursing as Caring' emerged as participants described the essence of their nursing practice as caring. This essence centered on caring for and caring about people. Recommendations to improve nursing education and practice for males were also advanced. Findings are significant for nursing in that understanding the essence of nursing as it is perceived by nurses who are male has been described. These findings may aid in recruitment and retention endeavors, provide educators with more effective teaching strategies for use with this population, and facilitate attempts to improve societal perceptions of men in nursing, thereby potentially decreasing discrimination and making the profession more welcoming. Findings support measures that could be taken within the nursing profession globally in order to embrace the diversity offered by men in nursing. 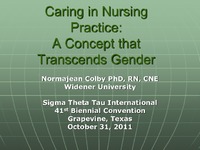