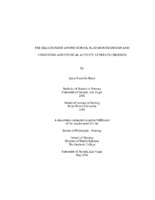 The citations below are meant to be used as guidelines. Patrons must make any necessary corrections before using. Pay special attention to personal names, capitalization, and dates. Always consult appropriate citation style resources for the exact formatting and punctuation guidelines.
Item Information
Item Link - Use this link for citations and online mentions.
http://hdl.handle.net/10755/20031
Abstract
Almost 20% of children aged 6 to 11 years are obese in the United States, tripling over the last ten years. The rise in childhood obesity challenges nurses in their efforts to improve community health and sustainability. A decrease in physical activity (PA) levels has been associated with an increase in obesity. Schools have been identified as a primary setting to provide children adequate amounts of daily PA, and nurses working in the area of child health promotion can work with schools to provide opportunities for children to increase PA levels. The playground is one environment where children can increase PA levels. The effects of the environment on recreational PA are less well studied. Therefore, the purpose of this cross-sectional study was to determine which types of playground areas and Target Area conditions attract children and promote moderate to vigorous physical activity (MVPA) or sedentarism. The sample consisted of two Henderson, Nevada elementary school playgrounds which were divided into 35 Target Areas that were each scanned once in the morning during leisure time before school hours. School B offered a Jog and Walk Stars (JAWS) PA program every day of the week, except on Wednesdays, where free play was offered, and school K offered only free play every morning. Data were collected for two weeks at both schools using System for Observing Play and Leisure Activity in Youth (SOPLAY) and the jogging track portion of System for Observing Play and Recreation in Communities (SOPARC) (school B: 190 scans, 19 Target Areas; school K: 160 scans, 16 Target Areas). SPSS version 22 was used to conduct all statistical analyses. Descriptive statistics, paired-samples t-tests, and independent-samples t-tests were used to analyze the data. The highest populated areas for schools K and B on non-JAWS days were the general blacktops (35% of the children for both schools), and about 50% of the children in these areas were found sedentary. At school B on JAWS days, the highest populated area was the JAWS track (72%), and 99% of the children participated in MVPA. F or both schools, the highest percentages of students found in Target Areas in MVPA were in supervised areas. At school K, more children were found engaged in MVPA with loose equipment. At school B, a higher percentage of children were found sedentary in areas with loose equipment, but most of the children participated in JAWS which did not require loose equipment. In the Target Area with the organized PA program, JAWS, 99% of the children participated in MVPA. There was a statistically significant increase in total sedentary boys and girls counted in Target Areas on non-JAWS days at school B (M = 8.11, SD = 12.84) compared to JAWS days (M = 2.99, SD = 3.85; t (18) = -2.23, p < 0.5, two-tailed). There was a significant difference in counts for average total sedentary children per square foot between school K (M = 216.70, SD = 218.97) compared to JAWS days at school B (M = 80.38, SD = 117.01; t (22.02) = 2.24, p < 0.5, two-tailed). There were no statistical differences between school K and school B on non-JAWS days in counts for the PA variables examined. At school B, 385 children were found participating in MVPA on JAWS days compared to 135 children on non-JAWS days and 135 children at school K. PA and Target Area design preferences in relation to gender differences were also discussed. A playground environment assessment to identify areas and conditions that promote MVPA, such as JAWS, may be one avenue to address the need for increasing MVPA levels in children in general, in addition to organized physical education classes.
Description
This dissertation has also been disseminated through the ProQuest Dissertations and Theses database. Dissertation/thesis number: 3631695; ProQuest document ID: 1566477525. The author still retains copyright.
Repository Posting Date
2020-02-20T16:54:49Z
Notes
This item has not gone through this repository's peer-review process, but has been accepted by the indicated university or college in partial fulfillment of the requirements for the specified degree.
Type Information
Category Information
Degree Information
Rights Holder