Predictors of success on the National Council Licensure Examination for Registered Nurses (NCLEX-RN) in a traditional baccalaureate nursing program: A descriptive study 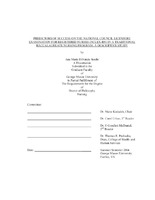 The citations below are meant to be used as guidelines. Patrons must make any necessary corrections before using. Pay special attention to personal names, capitalization, and dates. Always consult appropriate citation style resources for the exact formatting and punctuation guidelines.
Item Information
Item Link - Use this link for citations and online mentions.
http://hdl.handle.net/10755/20022
Abstract
A major issue for most nursing programs is how to produce graduates who will be successful in the program and on the NCLEX-RN. Providing an optimal undergraduate education is made more difficult by issues such as limited clinical space for students' experiences, and the nursing shortage, which increases the pressure on nursing programs to accept more students and graduate all admitted students. It is imperative that nursing programs accept those applicants who are most likely to graduate, and in a timely manner. This study examined variables that have been suggested as predictors of success on the NCLEX-RN. The study was conducted in two phases. The first phase was an analysis of the results of a survey of graduates at a Mid-Atlantic public university during the years 2007 to 2010. The Phase I sample consisted of 91 subjects. The dependent variable for the Phase I of the study was success on the NCLEX-RN on the first attempt. The independent demographic variables were academic difficulty, English as first language, marital status, residence during last year of the nursing program, perceived personal issues, gender, age, previous college education, average number of hours worked while enrolled in the last year of the nursing program, responsibility for others, and prior work experience in the medical field. Additional academic independent variables were ATI-TEAS preadmission scores (science, math, and reading comprehension), final grade for NURS 410 course (Nursing Care of Clients With Pathological Conditions), and ATI-CARP exit score on the first attempt. Phase I data analysis did not reveal statistically significant demographic or academic variables that predicted success on the NCLEX-RN on the first attempt. However, study subjects who self-reported academic difficulties and self-reported failure on the NCLEX-RN on the first attempt also had low ATI-TEAS preadmission scores on the reading and science tests. Phase II involved analysis of graduates' success using two dependent variables: NURS 410 final grade and ATI-CARP exit score (as a proxy for NCLEX-RN). Phase II consisted of two subject groups n = 91 (survey respondents) and N = 368 (secondary data analysis of the university's records of traditional nursing graduates from 2007 to 2010) to explore relationships between the ATI-TEAS preadmission test scores (independent variables) and the dependent variables. Among the initial group of survey respondents ( n = 91), the science preadmission test score significantly predicted ATI-CARP exit score success. This finding was consistent with prior research (Newton, Smith, Moore, & Magnan, 2007; Spurlock & Hunt, 2008; Symes, Tart, & Travis, 2005). Among the larger group of all traditional nursing graduates of the nursing program (N = 368), all the ATI-TEAS preadmission scores (math, science, and reading comprehension), were significantly correlated. The residuals from the percentile values, however, were very high (22,872), indicating that a high percentage of the score is unaccounted for by these variables (Munro, 2001). Thus, no significant predictors of ATI-CARP success were found. Analysis of the study data from these analyses demonstrated the difficulty of predicting baccalaureate nursing students' success on the NCLEX-RN on the first attempt. A longitudinal study would allow collection of concurrent student perceptions of academic difficulty. Also, future research should focus on the specific attributes and experiences of students who fail the NCLEX-RN (on the first attempt). Finally, concurrent evaluation of students as they progress through the program would allow ongoing evaluation of students, using their preadmission scores as potentially significant predictors of students' success.
Description
This dissertation has also been disseminated through the ProQuest Dissertations and Theses database. Dissertation/thesis number: 3671682; ProQuest document ID: 1651236350. The author still retains copyright.
Repository Posting Date
2020-02-20T16:19:48Z
Notes
This item has not gone through this repository's peer-review process, but has been accepted by the indicated university or college in partial fulfillment of the requirements for the specified degree.
Type Information
Category Information
Degree Information
Rights Holder