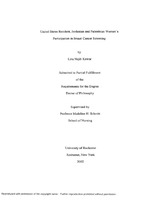 The citations below are meant to be used as guidelines. Patrons must make any necessary corrections before using. Pay special attention to personal names, capitalization, and dates. Always consult appropriate citation style resources for the exact formatting and punctuation guidelines.
Item Information
Item Link - Use this link for citations and online mentions.
http://hdl.handle.net/10755/20013
Abstract
Breast cancer is a threatening disease to women worldwide. Breast cancer screening (BCS) is a key to early detection and reduced mortality. Factors predicting women's participation in BCS have been well studied in the United States (US), including among major US racial and ethnic minority groups. Factors predicting participation in BCS among immigrant ethnic groups, such as Arab women, are less well studied, especially cultural factors that may be barriers to BCS. The purposes of this cross-sectional, predictive, correlational study were to: (1) describe US resident-Jordanian and Palestinian women's psychological variables (feelings, attitudes, and habits) toward participation in BCS, (2) examine the relationship between the psychological variables and participation, (3) explore the sociocultural factors (social norms, social influences, and acculturation) that correlate with US resident-Jordanian and Palestinian women's participation in BCS, (4) examine the relationship between the sociocultural and psychological variables, (5) determine whether psychological variables mediate the contribution of sociocultural factors to BCS participation, (6) describe these women's knowledge about BCS, (7) describe the enabling factors, and (8) qualitatively explore the barriers that interfere with Jordanian women's participation in BCS. A two-phase pilot study preceded the main study. One hundred and thirty healthy US resident-Jordanian and Palestinian women participated in the main study. Snowballing sampling technique was used to identify the participants. Most mediating hypotheses were not supported. However, health habits were found to mediate the relationship between social influences (encouragement from family, friends, and health care providers to seek BCS) and participation in BCS. Less negative affect, stronger beliefs in the importance of BCS, and higher scores on general health habits all were associated with higher participation in BCS. Greater knowledge about breast cancer and enabling factors also were associated with higher participation in BCS. Several sociocultural variables correlated with the psychological variables, and qualitative descriptive data offered strong support for the importance of cultural variables. Barriers reported by participants were composed of sociocultural barriers, sociocultural beliefs, socioeconomic factors, knowledge, and language. There are many implications of the findings for clinical practice, health education, and future research related to BCS among Jordanian/Palestinian and other Arab women immigrants.
Description
This dissertation has also been disseminated through the ProQuest Dissertations and Theses database. Dissertation/thesis number: 3045860; ProQuest document ID: 305474926. The author still retains copyright.
Repository Posting Date
2020-02-20T15:51:05Z
Notes
This item has not gone through this repository's peer-review process, but has been accepted by the indicated university or college in partial fulfillment of the requirements for the specified degree.
Type Information
Category Information
Degree Information
Rights Holder