Socialization of men into nursing

Background: As of 2004, there were more than 2.9 million Registered Nurses (RNs) in the United States. More than 2.4 million RNs are employed in nursing. Male nurses account for 5.7% of all nurses, up from 5.4% in 2000. Aim of the Study: To explore the process that led to the male nurse’s decision to become a nurse and to remain a nurse. Methodology: Grounded theory methods were used to generate a descriptive theory of socialization of men into nursing. Data were collected by individual, semi-structured, in-depth interviews with 20 male Registered Nurses, residing in Massachusetts, with 1 to 35 years of experience as RNs. The participants were recruited through personal contact with people known to the researcher and through snowball sampling. The researcher did not know any of the men prior to the interview. The audiotaped interviews were transcribed and verified. Analysis: Analysis was conducted throughout the data collection period using open, axial, and selective coding. A constant comparative approach was used until saturation of the categories appeared. Memos, in the form of code notes, theoretical notes, and operational notes, helped to establish an audit trail. MaxQDA was used to assist with data management and analysis. Findings: A basic social process, socializing men into nursing, emerged from the data. The basic social process comprises a trajectory of four stages, which encompass the path that men travel to become and remain nurses. These stages occur in a linear manner. The first stage is prior to considering nursing. This is followed by choosing nursing, becoming a nurse, and ends with being a nurse. Conclusion: This study extends our knowledge of male nurses by describing the trajectory that men follow in becoming a nurse. It has implications for policy development that will influence the recruitment and retention of men in nursing. 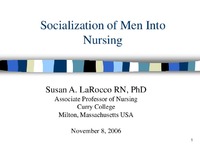