Walt Whitman’s life as a nurse during the Civil War is largely ignored in the nursing literature. His service to wounded and dying soldiers, as well as his poetry about the horrors of war, deserves recognition.

The Civil War (1861-1865) resulted in more than 600,000 casualties. Many of these men died a horrible death, lacking the basics such as clean dressings, adequate food and even minimal pain relief. Thousands more were wounded and survived, in part because of the care provided by recovering soldiers and the untrained volunteer nurses. Walt Whitman was one of these nurses.

In early 1863 Whitman was appointed to the U.S. Christian Commission, a voluntary organization that focused on physical and spiritual service to the wounded. Employed at this time as a part time clerk in the Army’s Paymaster Office, he used his free time to care for wounded men in the tent hospitals springing up throughout Washington, DC. In addition to physical care, he demonstrates his concern for the psychosocial wellbeing of his patients by writing letters home and listening to the frightened young men. These experiences are shared in his letters, his notebooks and his poetry, in a section of Leaves of Grass (1865) entitled Drum Taps. Whitman’s understanding of nursing presence is evidenced by his comment “I found it was the simple matter of personal presence, and emanating ordinary good cheer and magnetism, that I succeeded…more than by medical nursing, or delicacies, or gifts of money, or anything else.” However, “The Dresser” describes in detail the physical care that he administered.

Bearing the bandages, water and sponge, Straight and swift to my wounded I go…

From the stump of the arm, the amputated hand, I undo the clotted lint, remove the slough, wash off the matter and blood… 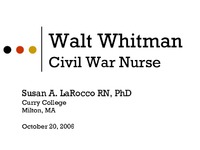