Becoming a nurse: Continuing the story of the Alexian Brothers Hospital School of Nursing graduates

The Alexian Brothers Hospital (ABH) School of Nursing in Chicago, founded in 1898, was the fifth all male nursing school in the United States.

Research Question: The aim of this study is to present the oral histories of men who graduated from the Alexian Brothers Hospital School of Nursing during the 1950s and 1960s, especially their experiences during their educational program at the ABH School of Nursing.

Theoretical Framework: Historical research is often viewed using a social or cultural frame of reference. Using a social framework allowed the researcher to view the men’s experiences in nursing school from a perspective that included the events that influenced society at that time. Additionally, a cultural framework provided an opportunity to view their actions in the broader context of the cultural norms of the 1950s and 1960s.

Methodology: Oral history interviews were conducted with 23 graduates of the school. All interviews were conducted in person and were audio-recorded, transcribed and participant checked for accuracy. Other primary sources included the records of the ABH School of Nursing. Secondary sources included books and articles referencing men nurses and nursing education in the 1950s and 1960s.

All of the men indicated that they received an excellent education that was the foundation for their continued education and successful nursing careers. Themes related to their nursing education that emerged from the interviews included: getting settled; academic work; clinical experiences; and social life. The recollections of these male nurses will add to our understanding of what it was like for a man to attend a religious affiliated all male hospital nursing school and to have clinical experiences at other hospitals where male nursing students or male nurses were virtually nonexistent. 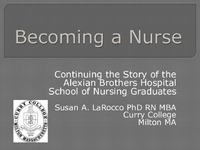