An Investigation of the Relationship Among Social Support, Motivation, Perceived Competence, and Pursuit of a Baccalaureate Degree Among Associate Degree Nurse Graduates

The Institute of Medicine Reports of the last ten years highlight the increased complexity of health care and the need for new ways for health providers to respond. While other professional programs have adapted to the growing complexity of the healthcare system and implemented increased educational requirements for entry to practice, notably pharmacy and physical therapy, nursing has not, and remains the least educated among health professionals The growing trend towards a two year Associate Degree as the initial nursing education degree is increasing at the same time that patient needs are becoming more complicated and health care is becoming more complex. The changing environment of the healthcare system requires an adaptive response from nursing. There is a need to explore those factors that influence educational mobility towards pursuit of a baccalaureate degree among associate degree nurse graduates, the largest segment of the nursing workforce. This quantitative, non-experimental, cross-sectional descriptive study explored the relationship among social support, motivation, competence and the pursuit of a baccalaureate degree among associate degree nurse graduates. The Roy Adaptation Model was used to guide the research design and Self-Determination Theory was used in the interpretation. A sample of 267 associate degree nurses who graduated from the City University of New York between 1997 and 2007 participated in a computer assisted telephone survey. Questionnaires included the Medical Outcomes Social Support Survey, adapted versions of the Self-Regulation for Learning and Perceived Competence Questionnaires as well as some selected demographic questions. Significant predictors for pursuit of a baccalaureate in nursing degree among this population included younger age, non-Hispanic Black race, income range of $104K to $145K and autonomous regulation of learning. Significant differences were found in autonomous regulation and perceived competence between those who did and those who did not pursue a BS. Social support was not a predictor, although it correctly classified 87% of those who pursued a baccalaureate degree. 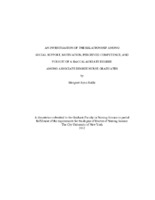