Predictors of Overall Perceived Health in Patients with Heart Failure

BACKGROUND: Overall perceived health (OPH) is a powerful and independent predictor of negative health outcomes and low health-related quality of life and is conspicuously low in patients with HF (HF). PURPOSE: The purpose of this study was to determine the key variables associated with OPH in persons with HF and to evaluate the variability in OPH attributable to each. METHODS: The Wilson and Cleary model (WCM) of patient outcomes was used as the conceptual framework for a secondary analysis of an existing dataset using a cross-sectional predictive design. Predictor variables included individual characteristics, biophysiological variables, physical symptoms, psychological symptoms, and functional status. Descriptive statistics were used to describe the sample, OPH and predictor variables. Con-elation analysis and parametric and non-parametric tests were used for preliminary examination of relationships between variables. A hierarchical regression analysis using five steps was conducted to determine the best model of predictors of OPH and the unique contribution of each variable. A multiple mediation analysis was conducted to assess the indirect effects of physical symptoms on OPH via two functional status variables, physical functioning and social functioning. RESULTS: The sample (N=265) was primarily male (64.2%), white (61.9%), married (54,3%), with a mean age of 62 years with at least a high school education, and a household income enough or more than enough to meet household needs. Most (69.1%) had systolic dysfunction, and 78.5% were New York Heart Association class III or IV. Individual characteristics alone explained 20.5% of the variance in OM. The final model containing 15 predictors explained 39.2% of the variance in OPH. Six variables were significant independent predictors of OPH including income, social functioning, comorbid burden, stability of physical symptoms, the interaction of gender and social functioning, and Black as compared to White race. The effects of shortness of breath and of fatigue on OPH were mediated by both physical and social functioning. Gender moderated the mediation of fatigue by social functioning.

Popular Works for Carlson, Beverly A. by View 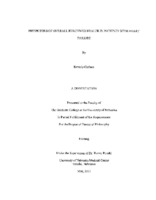