Comparison of Three Teaching Methods on Four-through-Seven Year Old Children's Understanding of the Lungs in Relation to a Peak Flow Meter in the Management of Asthma: A Pilot Study 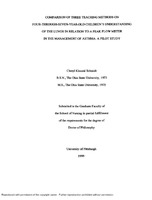 The citations below are meant to be used as guidelines. Patrons must make any necessary corrections before using. Pay special attention to personal names, capitalization, and dates. Always consult appropriate citation style resources for the exact formatting and punctuation guidelines.
Item Information
Item Link - Use this link for citations and online mentions.
http://hdl.handle.net/10755/19329
Abstract
The purpose of this study was to compare the effects of three teaching methods on 4-through-7-year-old children's understanding of the lungs in relation to a peak flow meter in the management of asthma. Nineteen children, 5 girls and 14 boys, ages 3-years, 8 months through 8-years old (x = 71.26, SD = 15.65), were recruited from an Asthma Clinic. Subjects were randomly assigned to one of three groups in a controlled, permuted-block, experimental design. The Doll Group viewed a doll with three-dimensional, stationary lungs, watched a Research Assistant (RA) use a peak flow meter (PFM), then demonstrated on their own PFM. The Puppet Group viewed a puppet with inflatable lungs use a PFM, then demonstrated on their own PFM. The Usual Care Group received the standard education in the Asthma Clinic, including pictures of the lungs, watched a staff member use a PFM, then demonstrated on their own PFM. Subjects' cognitive levels were measured with the Kaufman Brief Intelligence Test (KBIT) (Kaufman and Kaufman, 1990). The hypothesis stated that, controlling for age, children in the Puppet Group will earn higher Posttest scores on Vessey's (1988) Inside-the-Body Test (Modified) (IBT-M) and Vessey's (1991) Body Parts Recognition Test (BPRT), compared to children in the other two groups. A General Linear Model ANCOVA, comparing Posttest scores among the three groups, with Pretest scores and age incorporated as the covariates, explained most of the variance (F = 14.27, p = .00, effect size = .93, observed power = 1.000, R2 = .93, and Adjusted R2 = .86). The hypothesis was not supported, although 4 children in the Puppet Group improved their scores, compared to 3 in the Doll Group and 2 in the Usual Care Group. There was a strong correlation between age and both Pretest (Pearson r = .796, p = .00) and Posttest scores (Pearson r = 749, p = .00). ANOVA demonstrated a significant effect of Pretest on Posttest scores (F = 20.734, p = .00). The findings suggest that children's body knowledge increases with age. This pilot study will be used to further develop strategies to teach asthmatic children about their lungs and PFMs. Research implications include conducting a similar study with a larger sample, as well as further psychometric testing of the body knowledge instruments used in this study.
Description
This dissertation has also been disseminated through the ProQuest Dissertations and Theses database. Dissertation/thesis number: 9927973; ProQuest document ID: 304519693. The author still retains copyright.
Repository Posting Date
2020-01-15T20:20:56Z
Notes
This item has not gone through this repository's peer-review process, but has been accepted by the indicated university or college in partial fulfillment of the requirements for the specified degree.
Type Information
Category Information
Degree Information
Rights Holder