Marital Reciprocal Support in the Context of Cancer 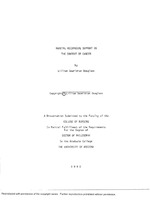