Academic Achievement in Children with New-onset Seizures or Asthma 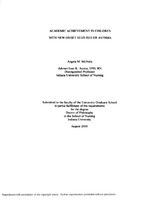 The citations below are meant to be used as guidelines. Patrons must make any necessary corrections before using. Pay special attention to personal names, capitalization, and dates. Always consult appropriate citation style resources for the exact formatting and punctuation guidelines.

This dissertation has also been disseminated through the ProQuest Dissertations and Theses database. Dissertation/thesis number: 9981074; ProQuest document ID: 304599372. The author still retains copyright.