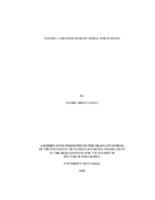 The citations below are meant to be used as guidelines. Patrons must make any necessary corrections before using. Pay special attention to personal names, capitalization, and dates. Always consult appropriate citation style resources for the exact formatting and punctuation guidelines.
Item Information
Item Link - Use this link for citations and online mentions.
http://hdl.handle.net/10755/19240
Abstract
The purpose of this study was to test a decision making model for nursing developed in a previous qualitative study. Concepts in the decision making model were creativity, experience, leadership, education, risk taking, and informatics. The Chinese philosophy of Cosmogony and chaos theory provided the theoretical framework for the model. Analysis of Decision Making in Nursing (ADMN), a tool developed for this study, incorporated a bipolar scale of 81 items. Pilot testing indicated adequate reliability and validity of the ADMN. The 5,000 subjects were randomly selected from a fist of registered nurses licensed and residing in Florida. A total of 510 questionnaires were returned, with 491 providing usable information. Correlation analysis, multiple regression, and path analysis were performed on an over-identified model. Four path coefficients had non-significant t values and were removed. The goodness of fit indices for the reduced model provided a mixed review of the effectiveness of the model. The significant chi-square test result (χ2 = 35.47, df = 7, p = 0.0001) suggested the model did not adequately represent the decision making framework. However, the Normed Fit Index (NFI) and Comparative Fit Index (CFI) values above 0.95 indicated a relatively high fit of the model to the data. In addition a Lagrange multiplier test did not suggest further improvements to the model which had not previously been considered or rejected. The reduced model explained 86% of the variance in decision making. Leadership furnished the largest direct effect (0.33), indirect effect (0.19), and total effect (0.52) on decision making. Experience (0.32), creativity, (0.24) and education (0.24) followed in total effect. Risk taking (0.14) and informatics (0.16) had the smallest direct effects on decision making. The study contributed to the body of knowledge in nursing about decision making in the four domains of nursing practice: clinical, administration, research, and education. Along with opportunities for additional research in model development, the results of this project may advance an informatics-based understanding—or even perhaps a theory—of nursing in the 21 st Century.
Description
This dissertation has also been disseminated through the ProQuest Dissertations and Theses database. Dissertation/thesis number: 9996569; ProQuest document ID: 304589237. The author still retains copyright.
Repository Posting Date
2019-11-25T17:36:44Z
Notes
This item has not gone through this repository's peer-review process, but has been accepted by the indicated university or college in partial fulfillment of the requirements for the specified degree.
Type Information
Category Information
Degree Information
Rights Holder