Sex, Drugs, and Religion: A Multi-ethnic Analysis of Health Behaviors, Attitudes, and Perceptions of Childbearing Women

Maternal health behaviors such as substance use and sexual promiscuity can put the health of mothers and their offspring at risk. Sociodemographic factors such as low socioeconomic status are also found to correlate with health risks for childbearing women. Hispanic women—especially those less-acculturated—often have sociodemographic risk factors present, but have paradoxically positive pregnancy outcomes. Healthy behaviors in addition to religiosity have been hypothesized to contribute to such positive outcomes. Past studies offer support for the positive influence of religion on healthy behaviors. The purpose of this study was to investigate the patterns and predictors of healthy behaviors and well-being of childbearing women, including those currently pregnant and in their first year postpartum. In addition to examining racial and ethnic differences, this study explored the role of religion and compared health behaviors and perceptions of pregnant versus postpartum women. This study was a secondary data analysis using cycle 6 of the National Survey of Family Growth, a dataset publicly available through the National Center for Health Statistics. The sample included 1,062 childbearing women who were Hispanic, White, or Black. Regression analyses were used to determine predictors of health-risk behaviors and health perceptions. Less-acculturated Hispanic women had the lowest rates of substance use and the highest levels of agreement with statements valuing traditional maternal roles compared to Blacks, Whites, and more-acculturated Hispanic women. White women had the highest rates of substance use, particularly smoking. Black women were the most likely to have had more than 1 sex partner or a non-monogamous partner in the previous year. There were no ethnic differences for prenatal care initiation or self-rated health. There were ethnic differences in religiosity with less-acculturated Hispanic women reporting higher importance of religion in their lives than more-acculturated Hispanics and Whites, but not Blacks. The respondents who rated religion as very important had the lowest rates of substance use and were more likely to report pregnancy happiness and agreement with traditional maternal roles. Future research is needed to further our understanding of ethnic disparities and the role of religiosity as a predictor for healthy outcomes among childbearing women. 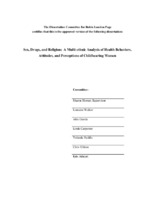