Influence of the Economy on Teen and Adult Birth Patterns in Oklahoma 1980 through 1995: A Time Series Analysis 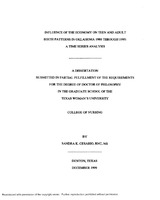 The citations below are meant to be used as guidelines. Patrons must make any necessary corrections before using. Pay special attention to personal names, capitalization, and dates. Always consult appropriate citation style resources for the exact formatting and punctuation guidelines.
Item Information
Item Link - Use this link for citations and online mentions.
http://hdl.handle.net/10755/18361
Abstract
Influence of the economy on birth patterns was examined separately for teen and adult women. Competing theories and conceptual frameworks currently exist to describe the cyclic patterns found in reproductive behavior and their relationships to economic condition. Procyclic models suggest a lagged positive association between economic conditions and numbers of births whereas countercyclic models indicate that a negative or inverse relationship exists. Three distinct problems were addressed in this study. First, the competing economic models was addressed. Second, this study of daily and weekly births to allow greater sensitivity in testing the relationship of an economic variable number and timing of births. Third, the lack of literature available to describe the differences between teen and adult birth patterns was addressed through separate data analyses for teens and adults. The procyclic Pennsylvania Model of contemporary economic theory of fertility served as the theoretical framework. The economic approach to fertility emphasizes the effects of parents' income and the cost of raising children on reproductive choices. This study disputes Milio's countercyclic Framework for Prevention which states that during periods of poor economic condition, access to health care services decreases causing the birth rate to increase. The sample for this study consisted of the 800,206 live births that occurred in Oklahoma between January 1, 1980 and December 31, 1995. The daily birth rate for each of 5,8444 days was obtained from the certificates of these births recorded by the Oklahoma State Department of Health, with separate data sets created for teen and adult births. A time series design was utilized to examine the pattern of births to teens and adults in Oklahoma in relation to economic changes which occurred in that state during the same time period. Findings of the study revealed that the ARIMA (0, 1, 1) model with a seasonal (0, 1, 1) component was the model that was most statistically adequate to represent the birth data and the oil price data in this study. Crosscorrelation of oil price with each birth data set indicated that there is a procyclic relationship between economic condition and the number of Oklahoma births to teens, adults, and both groups combined. Descriptive data yielded demographic differences in the teen and adult birth groups in regard to age of the mother and father, mother's marital status, race of mother and father, and rurality. Chi Square analysis revealed a significant seasonal cycle within the adult and teen birth data with a significantly higher rate of births during the summer months of July, August, and September. There was no significant seasonal difference, however, between teen and adult birth patterns.
Funder(s)
Beta Delta at-Large Chapter of Sigma Theta Tau International;
Association of Women's Health, Obstetric, and Neonatal Nurses
Description
This dissertation has also been disseminated through the ProQuest Dissertations and Theses database. Dissertation/thesis number: 9954231; ProQuest document ID: 304569492. The author still retains copyright.
Repository Posting Date
2019-09-13T20:12:26Z
Notes
This item has not gone through this repository's peer-review process, but has been accepted by the indicated university or college in partial fulfillment of the requirements for the specified degree.
Type Information
Category Information
Degree Information
Rights Holder