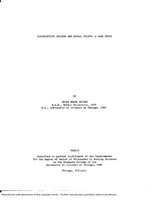 The citations below are meant to be used as guidelines. Patrons must make any necessary corrections before using. Pay special attention to personal names, capitalization, and dates. Always consult appropriate citation style resources for the exact formatting and punctuation guidelines.
Item Information
Item Link - Use this link for citations and online mentions.
http://hdl.handle.net/10755/18289
Abstract
This research focused on explicating the conceptions of just distribution of resources underlying one example of health policy. The policy used as a case study was federal funding of home health care under Medicare, during the period 1965-1984. The data consisted of the public records of debate on federal policy for home health care during this period. Based on an analysis of the concept of distributive justice, eight different criteria used to define the concept were operationalized: Ascription, Equality, "Justice as Fairness," Choice, Financial Need, Merit, Need, and Utilitarianism. Content analysis was performed on the data using these criteria, as well as several other policy-relevant variables. These variables included problem statement addressed in the debate, strategies suggested to address the problem, outcomes of the debate, type of debate, actors involved, and time period. Results indicated that the most frequently mentioned criteria for distributive justice were Ascription, Need, and Merit. Ascription was used often because the policy under discussion here was focused on one specific group, the elderly. Much of the debate categorized as Need-based focused on allocating resources to meet a variety of the needs of the elderly. Opposing arguments, often categorized as Merit-based, stressed that individuals have a responsibility to meet their own needs at whatever level they can afford. Discussions of the criterion of Need decreased towards the end of the period studied and were replaced by concerns with cost containment via cost shifting for services to the elderly themselves. No clear patterns were discerned between problems addressed, strategies suggested, and criteria of distributive justice, largely because the distributive justice arguments made were often expressed in global terms. Thus the same criterion of justice could be used to support opposing problem and strategy statements. These global arguments were common because of the difficulty of making specific justice statements in light of the reality of politics, where such statements increase the likelihood of alienating segments of the population. Inquiry into the role of morals in health and social policy serves to encourage dialogue on the value bases of social policy, resulting in more informed and thoughtful policy debate.
Description
This dissertation has also been disseminated through the ProQuest Dissertations and Theses database. Dissertation/thesis number: 8825106; ProQuest document ID: 303696521. The author still retains copyright.
Repository Posting Date
2019-08-12T19:01:46Z
Notes
This item has not gone through this repository's peer-review process, but has been accepted by the indicated university or college in partial fulfillment of the requirements for the specified degree.
Type Information
Category Information
Degree Information
Rights Holder