Background: Chronic insomnia (CI) affects over 50% of American adults 65 years and older. The most currently used treatment approach for this problem is inconsistent with the most up-to-date evidence-based clinical guidelines and research. Despite the apparent benefits of cognitive-behavioral therapy for insomnia (CBTI) as an effective tool for the treatment of CI in adults, pharmacologic treatment remains the standard care for CI in the primary care setting. This health care improvement project aimed to improve the application of evidence for CI treatment by increasing the clinic providers’ awareness of CBTI as first-line treatment for CI. Methods: The Plan Do Study Act method of quality improvement was used for this project. A retrospective chart review of patient medical records was conducted to evaluate trends in provider treatment approaches (CBTI and pharmacologic) at baseline and over a six-week period after the intervention. Pre-and post-intervention surveys measured provider knowledge and opinions about CBTI. Intervention: A one-hour interactive educational intervention session was provided to a convenience sample of eight primary care providers focusing on CBTI as first-line treatment of CI in adults. Results: Six-weeks following the educational session intervention, referral rate increased from 15% at baseline to 26% six-weeks post-intervention while pharmacologic prescription rates remained consistent at about 70% between baseline and post-intervention. While these average figures suggested that the intervention was successful with the increasing use of CBTI among the providers, examination of trends in prescribing over the pre- and post-intervention demonstrated that changes in prescribing patterns peaked three weeks post-intervention, but then began to return to original rates. By week six, any advances made in lowering pharmacological prescribing were no longer evident. All eight providers report that educational intervention improved their knowledge of the clinical guidelines. Conclusions: An educational session on CBTI as a first-line of treatment for CI to providers in a primary care setting appeared to have an impact on increasing CBTI rate, but did not decrease the rate of pharmacological prescription rates. However, a trend analysis suggests that trends in change peaked three-weeks post-intervention and began to return to baseline values. These findings are consistent with literature about resistance to practice and organization change, and highlight the importance of “refreezing” as part of the theoretical framework. While these findings are encouraging, additional options need to be considered for assuring a sustainable change in this particular clinical environment. 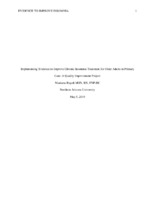