Bioidentical Hormone Therapy: A Look at Standard of Practice, Attitudes, and Knowledge

Traditional hormone replacement therapy (HRT) is considered the gold standard for management of hormonal deficits. The findings generated by the Women’s Health Initiative (WHI) trials concluded in July 2002 revealed health hazards associated with traditional HRTs, suggesting that individuals suffering from hormonal deficiencies or imbalance require alternative treatment modalities. Moreover, empirical evidence indicates that many healthcare providers in the United States have reservations about traditional HRT or face barriers in prescribing this form of therapy to their patients. Given the aforementioned issues, bioidentical hormone therapy (BHT) has emerged as a viable alternative to traditional hormone replacement therapy. However, as it is a relatively new form of treatment, most healthcare providers require further information about its safety and current standards of practice. The goal of the DNP project presented herein is to optimize care provided by the medical community by exploring whether gender-related bias exists and whether it influences providers’ attitudes toward prescribing traditional HRT versus BHT to hormone-deficient patients. These issues were examined by randomly email surveying 200 healthcare providers. The study scope was restricted to healthcare providers working in family practice, family health, urology, women’s health, and internal medicine in the State of Florida. Quantitative approach to data collection and analysis was adopted, as this allowed assessment of participants’ standards of practice, attitudes, and knowledge. The pre-survey was conducted using a 30-item questionnaire designed by the DNP student conducting this project, which was copyrighted © on March 14, 2014. Please note as a disclaimer, the DNP student use of the pre-survey will be used to gain insight into the medical providers responses related to bio-identical hormone therapy with the intent of further development and testing this survey as a future survey with the purpose of identifying key issues related to BHT and medical providers prescribing practices. As all responses were given on a Likert scale, they were subsequently analyzed and the findings were reported as frequency tables. The main study findings were summarized in a Power Point presentation, and were provided in the form of handouts that will serve as a platform to promote an open dialog about bioidentical hormone therapy. In summary, the findings yielded by the DNP student Project will assist the healthcare community in improving the quality of care offered to individuals experiencing andropause and menopause signs and symptoms. 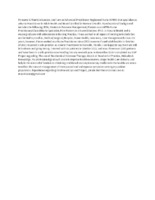