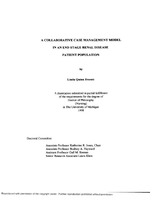 The citations below are meant to be used as guidelines. Patrons must make any necessary corrections before using. Pay special attention to personal names, capitalization, and dates. Always consult appropriate citation style resources for the exact formatting and punctuation guidelines.
Item Information
Item Link - Use this link for citations and online mentions.
http://hdl.handle.net/10755/17103
Abstract
The purpose of this pilot study was to examine the effectiveness of a collaborative case management (CCM) model on an end stage renal disease (ESRD) patient population. The study attempted to confront some of the conceptual and methodological issues surrounding the study of case management. Those issues included: absence of a theoretical framework; the omission of operational definitions of case management; lack of clear specification and measurement of sample selection criteria; the frequent use of weak pre-post designs; and the use of unstandardized instruments. The following strategies to address these issues were presented: a theoretical framework was developed in which to study the phenomenon; a testable model with operational definitions was developed; components of the model were tested and statistically analyzed; the study was guided by a pre-post, quasi-experimental design that utilized specific sample selection criteria; and an attempt to quantify and measure specific prevention nursing interventions was completed. The study design was developed around a fundamental belief: the educational preparation of the clinical nurse specialist (CNS) in areas of health promotion, disease prevention, and the focus of the individual in the context of the family render this practitioner the most qualified person to serve in the role as "case manager." The key concepts of the CCM model included communication, coordination, collaboration, and continuity of care, and specific prevention interventions--primary, secondary, and tertiary. The findings were partially supportive for three of the four study hypotheses. Patients receiving care under the CCM model were found to have a lower level of anemia, higher levels of adequate dialysis, and fewer vascular access problems, especially those related to infections, than those patients receiving care under existing practices. The experimental group also had more visits with the primary social worker while experiencing fewer gaps in overall social worker visits than the control group. Although there were no statistical differences noted in the findings related to health services resource utilization, there were financially favorable outcomes. The experimental group experienced a decline of 1.16 days in the hospital length of stay, this equates to an annualized cost savings of $94,000 and potential \$420,000 in net revenues to the institution. For the same measurement period, the control group realized a decline of.07 days. Findings related to the professional staff indicated that the CCM resulted in a perceived higher level of coordination and collaboration within the non-physician staff in the experimental group. No significant differences were found in the perceived level of communication. Finally, it was recommended that further research should focus on the continuum of care. It was also suggested that a larger patient sample, over a longer period of time in multiple care delivery sites would be beneficial.
Description
This dissertation has also been disseminated through the ProQuest Dissertations and Theses database. Dissertation/thesis number: 9909888; ProQuest document ID: 304431064. The author still retains copyright.
Repository Posting Date
2019-04-01T16:53:25Z
Notes
This item has not gone through this repository's peer-review process, but has been accepted by the indicated university or college in partial fulfillment of the requirements for the specified degree.
Type Information
Category Information
Degree Information
Rights Holder