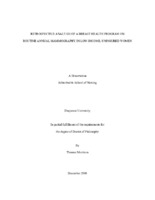 The citations below are meant to be used as guidelines. Patrons must make any necessary corrections before using. Pay special attention to personal names, capitalization, and dates. Always consult appropriate citation style resources for the exact formatting and punctuation guidelines.
Item Information
Item Link - Use this link for citations and online mentions.
http://hdl.handle.net/10755/17089
Abstract

Problem. Detection of breast cancer in women of low socioeconomic status, lacking health insurance, can be improved by increasing annual mammography rates, yet little is known about their screening behavior.

Design and methods. English and Spanish speaking women 40 years old and over who viewed in a 7-minute breast health DVD and were offered free mammography were eligible for the study (N = 223). The Health Belief Model (HBM) (Becker, 1974) provided the study framework that utilized radiology billing records for mammography completion and a dual-language self-administered survey. Data retrieval was from March 2004 to July 2009, with DVD viewing beginning in December 2006. Recruitment occurred between July 2009 and September 2009.

This dissertation has also been disseminated through the ProQuest Dissertations and Theses database. Dissertation/thesis number: 3386653; ProQuest document ID: 304882081. The author still retains copyright.