Peer-to-peer sexual harassment is pervasive in secondary schools and is responsible for a number of health effects such as sleeplessness, loss of self-esteem and depression, as well as other negative educational and social effects (AAUW, 1993; Morrisey, 1995; PCSW, 1995; vanRoosmalen & McDaniel, 1998). As a behavior that is learned, the incidence of peer-to-peer sexual harassment may be reduced through interventions aimed at changing inappropriate and harmful behavior. The purpose of this study was to describe and explain the basic social psychological process that induces and perpetuates peer-to-peer sexual harassment in adolescents. In order to achieve this goal, it was necessary to study adolescent group life and conduct in a way that would provide information about how adolescents define situations in their environment and how those definitions influence actions and the consequences of those actions. The discovery model or grounded theory approach was used to guide this study, based on the work of Glaser and Strauss (Glaser, 1978, Glaser & Strauss, 1967; Strauss & Corbin, 1998). Data were gathered over the course of one academic semester in a small urban high school through observations in the study setting, focus groups and interviews. Adolescents who were enrolled in the school and who were between the ages of 14 through 18 were identified as the primary participants in this study. Analysis of the data revealed that adolescents encountered the basic social psychological problem of “mistaking one's social identity”. Adolescents solved the problem, in part, by exchanging sexually related verbal and non-verbal messages with other adolescents whom they encountered in the environment. These patterns of communication and their outcome formed a four stage basic social psychological process: encountering another, assessing the relationship, sending/receiving a message/response, and clarifying the social identity. The basic social process of building a social identity is the substantive theory. This theory provides a basis for nursing assessment and the development and evaluation of interventions to assist adolescents in the formation of positive social patterns. 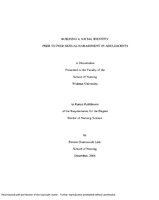