College Student Risk Behavior: The Implications of Religiosity and Impulsivity 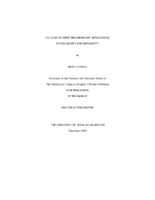 Popular Works for Cazzell, Mary A. by View

The citations below are meant to be used as guidelines. Patrons must make any necessary corrections before using. Pay special attention to personal names, capitalization, and dates. Always consult appropriate citation style resources for the exact formatting and punctuation guidelines.
Item Information
Item Link - Use this link for citations and online mentions.
http://hdl.handle.net/10755/17071
Abstract
College student risk-taking among 18 to 21 years olds includes smoking cigarettes, binge drinking, casual sex with multiple partners, automobile accidents due to risky driving or driving under the influence, and substance use. Among 10 to 24 year olds, 72% of all fatalities result from automobile accidents, unintended injuries, homicide, and suicide. Since not all college students participate in risk behaviors, protective factors such as religiosity may be a protective social or psychological buffer that supports positive relationships and moral order. Impulsivity, an inability to squelch inappropriate thoughts or actions, is associated with the later development (in the mid-twenties) of the prefrontal cortex. The purpose of the cross-sectional correlational study is to determine the strength of associations between public and private religiosity, impulsivity, age, gender, fraternity/sorority membership (Greek affiliation), and risk-taking propensity among college students, 18 to 20 years old, who live away from home. All study participants (n = 110; mean age = 18.9 years) completed two behavioral measures, Tower of Hanoi (TOH) and Balloon Analogue Risk Task (BART) and four paper surveys (demographic information, Age Universal Religious Universal Orientation Scale-12, Eysenck Impulsivity Subscale, and College Student Risk Behavior Measure). Adequate reliability was obtained for BART, private religiosity subscale, and Eysenck Impulsivity Subscale. Results showed high mean private religiosity scores, low mean impulsivity scores, low average balloon inflations on BART, and two risk behaviors over the past 30 days. Only six sorority members participated in the study. Regression analysis explained that age, gender, private religiosity, and impulsivity accounted for only 4% of the variance in risk-taking propensity. The findings advocate for a broader investigation of the multi-dimensional influences that impact college student risk behavior. Lower impulsivity and BART scores suggest a link between environmental challenge, late adolescent neurobiology, and cognitive variables. BART proved to be an interactive educational strategy on inclination to take risks. Implications for nursing practice, education, and research describe links between adolescent neurodevelopment, reward-seeking or motivation, individually-planned prevention programs, as well as teaching and recruitment strategies.
Description
This dissertation has also been disseminated through the ProQuest Dissertations and Theses database. Dissertation/thesis number: 3391108; ProQuest document ID: 305177175. The author still retains copyright.
Repository Posting Date
2019-03-22T17:45:37Z
Notes
This item has not gone through this repository's peer-review process, but has been accepted by the indicated university or college in partial fulfillment of the requirements for the specified degree.
Type Information
Category Information
Degree Information
Rights Holder