A Psychometric Analysis of the Self-report of Labor Pain 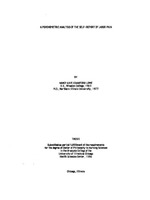 The citations below are meant to be used as guidelines. Patrons must make any necessary corrections before using. Pay special attention to personal names, capitalization, and dates. Always consult appropriate citation style resources for the exact formatting and punctuation guidelines.
Item Information
Item Link - Use this link for citations and online mentions.
http://hdl.handle.net/10755/17069
Abstract
This non-experimental, field study investigated the reliability and validity of the postpartum recall of labor pain, and the relationships between pain and a number of selected antecedent, intervening, and labor related phenomena. Fifty married parturient women, ages 19 to 39, at term with a normal pregnancy, served as subjects. Data were collected during early, active, transitional and second stage labor and during the postpartum hospitalization using the McGill Pain Questionnaire (MPQ) and measures of state anxiety, confidence in ability to handle labor, fear of pain, concern regarding the outcome of labor, feelings of control, and birth enjoyment. Cervical dilatation, contraction frequency, blood pressure, and heart rate were also recorded. Repeated measures analysis of variance using the MANOVA approach showed that postpartum report of labor pain on the ordinal Present Pain Intensity scale of the MPQ was not consistently congruent with pain report during labor. In contrast, the multidimensional Pain Rating Index of the MPQ provided postpartum data that was statistically congruent with in-labor report. Significant interaction effects suggested that postpartally the women tended to devaluate the pain of early labor and inflate the pain of transitional labor. Nulliparas were found to experience greater pain during early labor and less pain during second stage than multiparas. Unprepared women experienced significantly greater pain during second stage. Significant predictors of pain during labor were confidence in ability to handle labor for early labor; fear of pain, anxiety, and confidence for active labor; confidence and feelings of control for transitional labor; and childbirth preparation, parity, and control for second stage. Exploration of the convergent and discriminant validity of measures of pain and anxiety by a multitrait-multimethod matrix indicated a need for further study of the measurement of these constructs. Comparisons were made between the effects of variables measured intrapartally and postpartally on pain report. These data suggested that postpartum measurement does not reflect the same relationships among constructs as identified from intrapartal measures.
Description
This dissertation has also been disseminated through the ProQuest Dissertations and Theses database. Dissertation/thesis number: 8622085; ProQuest document ID: 303565266. The author still retains copyright.
Repository Posting Date
2019-03-22T17:36:32Z
Notes
This item has not gone through this repository's peer-review process, but has been accepted by the indicated university or college in partial fulfillment of the requirements for the specified degree.In all cases this material has been filmed in the best possible way from the available copy. Problems encountered with this document: Indistinct, broken, or small print on several pages.
Type Information
Category Information
Degree Information
Rights Holder