Nurses interested in impacting the formation of policy must understand the multiple factors which influence the process. Mass communication is one important factor because it influences the creation and transmission of political realities. Rhetorical criticism was the methodology used to analyze the persuasive powers of the mass communication, and thereby provide insights into the policy formation process. The purpose of this investigation was to explore the rhetorical strategies of mass communication regarding the issue of infant mortality. The strategies were illuminated within the political context of Indiana's 1988 and 1989 legislative years, and related to legislative activities surrounding legislation which expanded Medicaid coverage for pregnant women and children (Senate Enrolled Act 449 of 1989 or SEA 449). Seventeen months (January, 1988 to May, 1989) of mass media articles on infant mortality were analyzed for fantasy themes. A fantasy theme is a complete scenario which conveys an interpretation of a segment of the world, and thereby creates social reality. The following four fantasy themes emerged from Indiana's mass media: the character theme of tiny babies dying needlessly in the arms of an inefficient system, the image theme depicting the capitol city, state and country's shame and foolishness, the action theme of policy makers grappling for their role, and society's misaligned priorities. Two themes emerged from the national mass media: the problem theme showed a complex world thwarting a simple solution, and the solution theme suggesting a caring society could solve the infant mortality crisis. The rhetorical vision which integrated all six themes into one symbolic reality described the paradox of the American Dream. Interviews of twenty four policy players involved in SEA 449 revealed two fantasy themes, one noting that blame is easier than praise, and the other focusing on uneducated women sitting center stage. A comparison of all themes showed that the media created the issue and expanded infant mortality to a wider public, but the media message was tempered by the strongly-held societal values of self-reliance, individual responsibility, and avoidance of governmental intervention. The methodology of rhetorical criticism was shown to have utility for the nursing profession and for those involved in the policy arena. 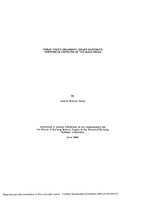